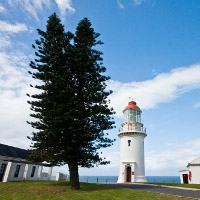 Hemingways Casino
Tsogo Sun’s Hemingways Casino is a great place to unwind, with its 500 slot machines, poker, blackjack and American Roulette tables with limits from R5 to R1,000. Besides the main casino area, there is also a smoking area gaming floor, as well as a VIP Salon Prive. The entertainment complex, which includes the Hemingways Mall, is right next door and offers the chance for a little retail therapy and the opportunity to enjoy a good meal.
The casino is open around the clock, while the mall adheres to traditional retail operating hours.
tsogosun.com

Hood Point Lighthouse
Hood Point lighthouse, standing 19 metres tall on the outskirts of East London, has been lighting sailors’ paths since 1895, the second lighthouse erected in the area. Being situated next to a golf course, it is apparently a favourable lighthouse with light keepers. This stretch of the South African coastline has been responsible for over 85 shipwrecks and claimed the harbour title ‘Port of Wrecks’ and local beaches, streets and hotels have been named after sunken vessels.
Visit Hood Point on Mondays, Wednesdays and Fridays from 10h00 to 12h00 and 13h00 to 15h00.
bctourism.co.za

Multi-Cultural Man
The people of Italy donated a bronze sculpture, called Multi-Cultural Man, which symbolises the universal humanity of all cultures with the seven doves representing the continents of the world.
The man is three meters tall and has been designed to represent no particular cultural, ethnic or religious background. Each continent was given an identical statue and East London hosts Africa’s statue; the others can be found in Toronto (Canada), Sarajevo (Bosnia-Herzegovina), Changchun (China) and Melbourne (Australia).

East London Museum
The East London Museum was established in 1921 and displays an interesting mix of natural and cultural history, including the famed coelacanth, back from the dead after a presumed 80-million year extinction. Collection highlights include the excavation of a large fossil reptile skull and skeleton, Kannemeyria simocephalus, near Tarkastad in 1934; a display of the area’s maritime history; and work on trace-fossil footprints found in coastal sandstone rock face, dated at about 120,000 years old – the earliest evidence of homosapiens in Africa.
The museum is open from Monday to Thursday from 09h30 -to16h30, on Fridays from 09h30 to 16h00, on Saturdays from 09h00 to 13h00 and Sundays and Public Holidays from 10h00 to 13h00.

City Hall
Mayor David Rees laid the foundation stone for the East London city hall in 1897 and the structure was completed in 1899. The original design included the Victoria Tower, added to commemorate Queen Victoria’s 60 years on the throne. The marble staircase was constructed from marble directly imported from Italy. It remains one of the last few colourful Victorian buildings, with its red-painted exterior, left standing today. A monument commemorating the lives lost in the South African War stands out front and a statue of Steve Biko is also situated on the grounds.
Visitors should ask the caretaker for permission to tour the building as it is still in regular use.

Ann Bryant Art Gallery
The Ann Bryant Art Gallery, inside a grand old Edwardian house, was opened to the public in 1947. It houses a permanent collection of South African art from the 1920s to the present day as well as a collection of European art dating back to the 1700s, and include works by Thomas Bowler, Maud Sumner, Lawrence Scully, George Pemba, Willie Bester and Norman Catherine.
Arrive at the main gate on St Luke’s Road to really appreciate the building’s elegance. After browsing the gallery, relax in the gardens with a light snack from the cafe in the adjacent Coach House.The gallery is open from Monday to Friday from 09h00 to 17h00, Saturdays from 09h00 to 12h00, and is closed Sundays and public holidays.
annbryant.co.za