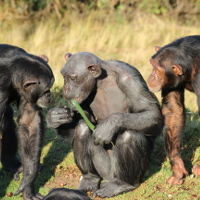 Jane Goodall Institute’s Chimpanzee Eden Fifteen kilometres outside of Nelspruit, on the Umhloti Nature Reserve, is a safe haven for orphaned and abused chimpanzees who were removed from their natural habitats. The resident chimps came from Angola, South Sudan, South Africa, and even one from the UAE who was kept as a spoilt pet. Their current lives are vastly different to their pasts, where they were kept in isolation, fed alcohol, drugs and cigarettes, beaten and under-stimulated. Today, they are living happily in family groups, with access to large enclosures, as close to a wild existence as can be exited, given their histories. The facility was established in 2006 and is open to public from 08h00 to 16h00 seven days a week. Guided tours take place daily at 10h00, 12h00 and 14h00 and last for about 90 minutes, and cost R185 per person. Check the website for space on the tours. chimpeden.com Saffron Restaurant  The onsite eatery of Chez Vincent Guest House, Saffron offers a continental a la carte menu, blending flavours of the Mediterranean with local produce. Vincent and Sara Martinez own and run the guest and restaurant and all reviews suggest that Sara’s hands-on running of Saffron makes for a pleasurable meal. The menu changes weekly, and is dependent on available ingredients, but there doesn’t seem to be one complaint regarding the taste and quality of the dishes. The restaurant is open for residents of the guest house only on Mondays. It opens to the public from Tuesday to Saturday and is closed on Sundays. It opens in the evening from 18h00 to 21h00 for dinner only. chezvincent.co.za Sudwala Caves The Sudwala Caves are the oldest known caves in world and were used as a refuge by a tribe from Swaziland during times of conflict with their King. During the South African War, from 1899 to 1902, the Boers used the caves as a storehouse for the Long tom gun ammunition. The caves were made accessible to the public in the 1960s. Tours of the central chamber, lasting one hour, leave every 15 minutes and cost R80. The more adventurous can book a Crystal Tour (R280) that lasts six hours and ventures 2,000m into the cave formation. It’s dirty, but rewarding, work for fit individuals who don’t suffer from claustrophobia. Next to the caves is the Sudwala Dinosaur Park, where you can see life-size models of pre-historic animals. Another on-site attraction is the resident Nile crocodile population. Entry costs R70 and the park is open from 08h30 to 17h00 daily. sudwalacaves.com Lowveld National Botanical Garden  If you’re looking for a little tranquillity while in Nelspruit, head to the Lowveld National Botanical Garden. Not only will you get an eyeful of greenery, you’ll also get an earful of rushing water from the Crocodile and Nels rivers as they flow through the gardens. Thanks to its proximity to water, the garden is green and the 2,000 plant species thrive. Clivias will greet you at the entrance; once inside, look out for the yellow bush lilies and the flame creepers. The garden has a large collection of cycads and has played a pivotal role in establishing the cycad gene bank to ensure the long-term survival of these unique plants. Get a good look at the Crocodile River from the suspension bridge as the water tumbles over a cliff with a roar. The garden is open daily from 08h00 to 17h00. Entry cost of R24. The Food Fundi The Food Fundi started out as a tiny 14-seater coffee shop that uses local and organic ingredients. Thanks to the continued support of local patrons, the establishment has grown into a solid favourite and comes highly recommended. The café serves a large menu of breakfast dishes, salads, sandwiches, cakes, smoothies and coffees and offers diners free wi-fi. During the week, the café is open from 07h30 to 18h00. On weekends, it opens at 08h00 and closes at 17h00 on Saturdays and 14h00 on Sundays. thefoodfundi.co.za Farm Stall at Halls Part of the Hall’s Gateway to the Lowveld shopping centre on the N4, you’ll find an array of local produce at the Farm Stalls. Browse through shelves of jams, preserves and relishes. Pick up fresh and dried fruits, biltong, eggs, vegetables, pies, roulades, pates, fresh bread, cheese and milk. And when you’re tired out from shopping, refresh yourself with a cup of coffee and a light meal at the onsite restaurant. The farm stalls are open seven days a week, from 08h00 to 17h00. thefarmstall.net