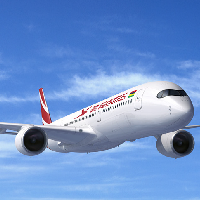 BACKGROUND: Air Mauritius used its 50th birthday to introduce the A350-900 aircraft to its fleet, making it the first operator in the Indian Ocean and the second in Africa to take on this aircraft. The interior of the A350 is spacious, with decent headroom, has been fitted with new seats in both cabins, and is equipped with wi-fi. The bright orange and green upholstery has been replaced with neutral greys and blues. Air Mauritius offers daily flights from Johannesburg and four direct weekly flights from Durban. As of 28 March it added two direct weekly flights from Cape Town.

CHECK-IN: I opted to check in via the Air Mauritius app, which proved rather simple. Once I got to O.R. Tambo International Airport, I did a quick bag drop and collected my boarding pass. The flight was almost full, but I arrived early and the bag drop queue moved fairly fast. Queues at security and immigration also moved at a fair pace, meaning I was airside in less than 15 minutes.

LOUNGE & BOARDING: As a partner with SAA, business class passengers get access to the Baobab Lounge. At midday on a Tuesday, the lounge was busy, but I was able to find a seat near the back of the lounge. I sampled a small bowl of beef stew and followed it up with a cup of tea and a pastry while I waited for the flight to board. Five minutes before boarding time, I made my way to the boarding gate, where I had to wait before joining the priority queue, which moved quickly. Business class passengers boarded through the front door, so getting to my seat was easy. Once settled, I was offered a drink and a magazine while waiting for take-off.

THE SEAT: The business class cabin has 28 seats in a 1-2-1 configuration, giving all passengers direct aisle access. I was near the back of the cabin, 6D, and was very comfortable. The pods in this row are arranged in such a way to give maximum space between the seats, so the passenger next to you has a hard time invading your privacy. The seat converts to a full-flat bed that connects to a foot rest, with little pockets of storage space beneath the arm rest for stowing phones and water bottles. These seats also sport the latest three-point safety belt and touch screen in-flight entertainment. I didn’t find the safety belt to be terribly comfortable, but it’s only compulsory during take-off and landing, so the discomfort is minimal. The touch screen, however, is easy to use and the selection of movies, TV shows, music and games is more than satisfactory for the four-hour flight. There are multiple charging points for your devices.

THE FLIGHT: We pushed back on time and were soon cruising at 40,000 feet. The drinks service began 45 minutes after take-off and the lunch menu was distributed shortly thereafter. The meal was a tasty experience with a smoked chicken starter, a cheese selection and a dessert trio of Malva pudding, pineapple Tatin and chocolate mousse. The main course offered a choice of four dishes – duck confit served with Sarladaise potatoes, chucky-cut spring veg and a red capsicum sauce, gingered chicken and apricot tagine with rice and veg; pan-roasted salmon trout, fennel sauce, potato gnocchi and veg; and broccoli and artichoke moussaka, coriander-flavoured basmati rice and grilled veg. I opted for the chicken and wasn’t disappointed. After lunch I plugged in the headphones and whiled away the remainder of the flight watching a movie.

ARRIVAL: Touchdown was a few minutes early and I was soon on my way to immigration. Despite being in a priority queue with fewer people, it took a while to reach the desk, and then a few more minutes before I was allowed to proceed. My luggage unfortunately wasn’t on the priority list, so any time I had gained from early disembarkation and priority immigration was lost while I waited for my suitcase.

VERDICT: The business class cabin is a great way to travel, with spacious and comfortable seats, attentive cabin crew, a hearty meal and a good selection of entertainment.