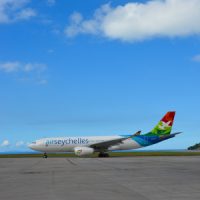 Air Seychelles has announced a major fleet and network expansion that will see the airline introduce a second Airbus A330 aircraft, commence non-stop services to Düsseldorf (Germany) and Durban (South Africa), and significantly strengthen its existing regional network in early 2017.

The airline plans to establish the air bridge between Seychelles and Germany on 30 March by launching two weekly services to Düsseldorf. The airline will also upgrade its Paris service from three to four flights per week, with effect from 28 March.

The airline’s second Airbus A330 aircraft is scheduled to be delivered in the last week of March and will have a two cabin configuration with 18 business class and 236 economy class seats.

To maximise aircraft utilisation, Air Seychelles will deploy an A330 on an additional fourth weekly frequency to Paris, which combined with Düsseldorf will provide 3,048 return seats between Seychelles and Europe each week.

In addition to flying to Europe, the Airbus A330 will be used to increase capacity on the airline’s regional services to Johannesburg, Mauritius and Mumbai, which are currently operated on a narrow-body A320, freeing up an Airbus A320 to launch flights to Durban.