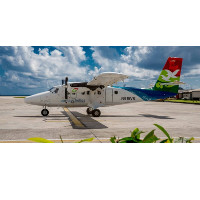 Named ‘Praslin’ after the second-largest island in Seychelles, the aircraft was welcomed by a delegation of government, tourism and airline officials.

‘Praslin’ is set to replace an older Twin Otter aircraft and will be joined later by another DHC-6 400 turboprop called ‘Farquhar’.

Both Twin Otter aircraft will enter operation before the end of March.