Ethiopian to fly to Delhi

The world has always heard about Africa through the western voices – the story about famine, poverty and disease – but that is not the true picture of Africa. The real African story is best told by African voices.
Read more 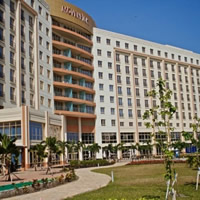 Since the outbreak of Ebola in West Africa in 2014, the region’s tourism business has taken a huge knock. While Guinea, Liberia and Sierra Leone were hardest hit, surrounding countries suffered a severe drop in visitor numbers last year. Thankfully, with infection numbers on the decline, life is starting to flow back into West Africa. But Ghana experienced a double whammy of a badly performing economy on top of the medical crisis. This is no reason to count the country out, however. Axel Hauser, General Manager of the Moevenpick Ambassador Hotel in Accra, is confident that despite these setbacks, Ghana has what it takes to fully recover, and is already seeing occupancy figures rise.
Read more

Advertorial: ExecuJet – Putting your aircraft in the right hands

Owning a business aircraft can be complicated. Yes, there are huge benefits, but various international regulations can cause problems, which is why it’s important to put your aircraft in the hands of a quality management company that will handle everything from planning flight slots to crewing, administration, maintenance and potentially generating charter revenue.
Read more

It seems the African MICE industry is always bouncing back from a tough year, and once again things are looking good for this segment of the corporate travel market. Richard Holmes takes a look at some of the trends and gets the thoughts of some of those executives who are immersed in the subject matter, as Africa’s MICE specialists look to make the most of another ‘boom’ year.
Read more
1...789Page 9 of 9