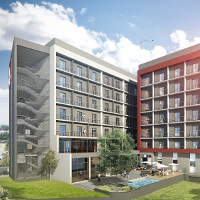 Good progress is being made on construction of the 147-room City Lodge Hotel Dar es Salaam in Tanzania’s capital city. The project started in mid-May and the hotel is expected to be completed and opened to the public towards the end of the fourth quarter of 2017. It will be the City Lodge group’s fourth hotel in East Africa. The eight-storey hotel (including basement parking) is situated in Magora Street in central Dar es Salaam and will feature three meeting rooms, a mini gym and a swimming pool.