Construction of the new concept Courtyard Hotel Waterfall City is nearing completion, and the hotel is set to open in the first quarter of 2021.

The hotel has 10 storeys and will feature a rooftop function area as well as a 100-seater conference facility. In addition to 164 rooms (16 of which are interleading) there are four suites, meeting rooms, a swimming pool and gym. There is also a large, independent restaurant on the ground level.

Décor is modern yet elegant, with soothing tones of fern and olive green livened up with splashes of tan and ochre.

Succulent plants are echoed in the décor of the rooms, on the floor rugs and planters. The headboard consists of stuffed leather cushions held up by belts. A compact ash wood open cupboard and television unit holds the fridge, large electronic safe, and tea and coffee making facilities. A large desk with comfortable chair, rug, couch, side tables and full-length mirror complete the room. 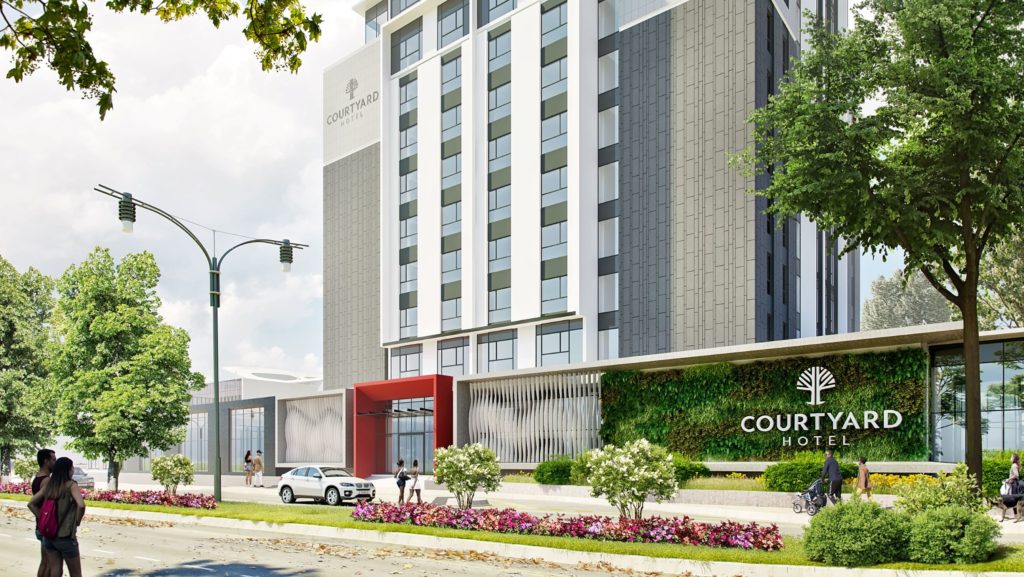 The public lounge has a communal table with plug points as a shared workspace – socially distanced of course – and several comfortable seating options.

The rooftop restaurant and function area are designed to wow as one steps out of the elevator. A large, double-volume, modern space makes the most of its lofty position to maximise the views across the city and spectacular Highveld sunsets given the hotel’s western orientation.

The four suites are also on the top floor, through a security-controlled doorway off of the elevators. Each suite accommodates two people and feature a full bathroom with bath (the remainder of the hotel rooms have showers only), small kitchenette and lounge area, as well as private patio.

For business meetings and events there are three dividable 30-seater meeting rooms, which when consolidated can accommodation 100 people, or 120 people when set up banquet-style with 15 eight-seater tables. There is fast, reliable wi-fi throughout the property and plenty of secure parking in the basement.

Courtyard Hotel Waterfall City will be the sixth Courtyard Hotel within the group, adding to the one each in Pretoria and Port Elizabeth and three in Johannesburg. Once it is operational, the group will have 63 hotels in six countries offering 8070 rooms to business and leisure travellers.