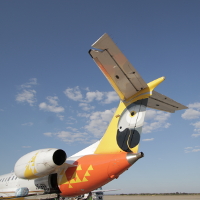 African low-cost airline fastjet reintroduced direct flights between Johannesburg and Victoria Falls on 31 July. In addition, the carrier will bulk up its route between Harare and Victoria Falls with daily, and at times twice daily, frequencies. The carrier’s recent increase between Harare and Johannesburg will be further supported with a fourth flight between the cities on peak-demand days.

The growth represents a doubling of current capacity in the Zimbabwean market with an additional Embraer E145 aircraft deployed on the routes. Fastjet will now operate more than 78 flights per week on its Zimbabwean routes. Fastjet’s on-time performance permanently hovers around the 90% mark and the airline was recently recognised by Skytrax as the best low-cost airline in Africa.

The reintroduction of direct flights between Johannesburg and Victoria Falls will make access to one of southern Africa’s most popular attractions more affordable. “We expect passenger volumes to include international connecting tourists as well as a considerable number of South African travellers whose geographic proximity makes weekend breaks and longer-term vacations an attractive and affordable leisure option,” says Hein Kaiser, fastjet’s spokesperson.

In addition, high demand prompted fastjet to increase its frequencies between Harare and Victoria Falls to a daily service with double daily frequencies during peak weekly cycles. “This represents a near 50% increase in flights from the capital with demand soaring beyond traditionally limiting seasonal boundaries,” says Kaiser who adds that fasjet’s introduction of additional capacity answers this growing demand.

Along with the reintroduction of flights between Victoria Falls and Johannesburg, the bulked-up operating schedule is on sale and the first flights launched on 31 July.

“Fastjet also recently announced positive movement on its route between Harare and Johannesburg when up to three daily flights were introduced. However, demand over the past month has shown that on peak-demand days there is the opportunity to introduce a fourth flight,” says Kaiser. The new schedule between Harare and Johannesburg also commenced operations on 31 July.

during fastjet’s Stabilisation Plan implementation which saw the business execute fleet and network changes, amongst others, to right-size it for the markets wherein it operates.

Nico Bezuidenhout was appointed as CEO in 2016 and is the driving force behind this move to improve the airline’s results. His priorities have been to address routes, fleet, organisation and revenue initiatives.

As such, the company headquarters will be moved from London to Johannesburg, to bring the company closer to its key markets and reduce expenses. The fleet of A319 aircraft has been reduced to three, and by bringing three Embraer E190s into the fold, fastjet’s load factor is expected to increase to above 70%.

A new mobile-payment platform and integration with the Amadeus GDS will make flights available to at least 50%of travel agents in Africa.

“The benefits of our Stabilisation Plan are beginning to materialise and we look forward to pursuing fastjet’s medium to long-term objective of becoming the first truly pan-African low-cost airline with the support of our newly-strengthened board,” Bezuidenhout reported in March.

Fastjet is a multi-award winning low-cost African airline that began flight operations in Tanzania in November 2012, flying passengers from Dar es Salaam to just two domestic destinations – Kilimanjaro and Mwanza. Today, fastjet’s route network includes Tanzanian domestic routes from its Dar es Salaam base to Kilimanjaro, Mbeya, and Mwanza, and international routes from Tanzania to Lusaka (Zambia) and Harare (Zimbabwe). Fastjet also began flight operations from its Zimbabwe base in October 2015, and now flies domestically from Harare to Victoria Falls, Harare to Dar es Salaam and internationally from both Harare and Victoria Falls to Johannesburg (South Africa).

The airline has flown over 2.5 million passengers with an impressive aggregate 94% on-time performance, establishing itself as a punctual, reliable, and affordable low-cost carrier.