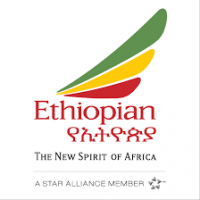 BACKGROUND: For years, Ethiopian Airlines has been considered a success story – if not the success story – of African aviation, and is the largest and most profitable carrier on the continent, with its youngest fleet. The flag carrier flies daily between Addis Ababa and London, departing Heathrow at 21h00 (21h45 on Wednesdays) and arriving at about 07h00 local time. From there, numerous transfers are available across sub-Saharan Africa, and to a few destinations beyond. The A350 was introduced onto the route in 2016.

CHECK-IN: I arrived at Heathrow T2 at 19h00 on a Friday to find clusters of confused-looking families huddled around the various Star Alliance self-service check-in booths in Zone D, with one staff member darting between them. Spare yourself stress by using Ethiopian’s online check-in service, which I’d forgotten to do. The bag drop and security queues were long but relatively smooth and speedy.

BOARDING: From the main shopping area it is a 10-minute brisk walk to the B gates, so leave sufficient time. Boarding was punctual. The aircraft created a good first impression, with pleasant Ethiopian music playing and welcoming flight attendants. The fabric seat coverings in alternating yellow and green don’t exactly look modern, but are cheerful, which personally I prefer.

THE SEAT: The A350-900 has 313 economy class seats in a 3-3-3 configuration (A-B-C, D-F-H, J-K-L) across two cabins, and 30 seats in business, which Ethiopian calls Cloud Nine. The economy seats are comfortable enough, 18 inches wide with a 32-inch pitch and a 13.8-degree recline. The pillow was a bit limp, but the blanket was a nice medium weight. Every seat had a UK plug socket and USB point. The in-flight entertainment had a 10.6-inch screen showing a handful of Hollywood and international films. One of my headphone jacks was broken, as was my companion’s, so sound only came out of one speaker, which was a minor annoyance. Google tells me airlines insist on using those annoying double slots that mean you can’t use your own headphones, so they don’t need replacing as often.

BEST SEAT: Online check-in, available 36 hours before the flight, allows you to pick a seat at no extra charge. I was given the option to switch at the airport, although obviously most seats were taken by this point. Tall passengers should consider seats 33A-C and 33J-L at the front of the second cabin, which have extra room thanks to the emergency exit, although bear in mind that a bassinet is located nearby. The window seats will give you a bit more distance from the washroom. Row 11 at the front of the first cabin may be better if you want to dash to the front of the visa queue on arrival, but will have more noise from the galley and is also where bassinets are positioned. There are virtual tours on the Ethiopian website that give a good sense of the A350-900 and B777-200 interiors.

THE FLIGHT: We set off without delay. Dinner reached us in the middle of the second economy cabin about an hour after take-off; given that this takes you to about 22h00, it could be worth factoring in a pre-flight snack. Food was decent, with chicken, mash and veg, a roll with cheese, potato salad, crackers and cake. The red wine was inoffensive. Lights were then dimmed for the rest of the flight, which passed smoothly. A syrupy fruit pot, chocolate muffin and hot drinks were brought around a little over an hour before landing.

ARRIVAL: We landed on time – flight duration is seven hours and 45 minutes – and were transferred to the terminal by bus. I was heading onwards to Tanzania and had been excited to see some of the airport’s new $363 million Terminal 2 during my layover. However, the project was still very much under construction and the transit area for regional connections was just a huge, busy room with toilets and little more. More facilities should start appearing later this year. The transit area for long-haul on my return was better, if short on seats with horrendous queues for boarding.

VERDICT: I chose Ethiopian because I was curious about the airline’s product and the Addis terminal extension. The latter was not yet finished (this review was written at the end of May), but the flight was an enjoyable experience with strong service and little to fault in its hard product.