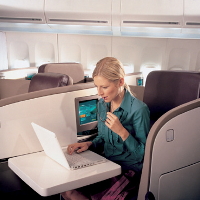 BACKGROUND: Virgin Atlantic flies to nine destinations in the USA and it added a tenth, Seattle (Washington), this year. The flight takes about nine hours which, as a daytime flight, can be a bit tedious, but the onboard wi-fi means that passengers can get hours of work done while travelling. My journey to Seattle began in Johannesburg, with an overnight flight with Virgin.

CHECK-IN: I checked in on the Virgin Atlantic app, which was really easy, but the friendly attendant at the Virgin transit desk at Heathrow Terminal 3 printed out a boarding pass for me to simplify my boarding.

LOUNGE & BOARDING: From the transit desk, I checked into the Virgin Atlantic Clubhouse to wait out the six-hour layover. When you have six hours to spend at an airport, the Clubhouse is a great place to do this. The lounge, part of which was receiving a makeover, is spacious and comfortable. There was a small buffet of cold meats, cheeses and salads, and a menu of hot food served by wait staff. The bar served a wide selection of alcoholic and coffee drinks. The wi-fi was free, and easy to connect to and plug points were numerous. The Clubhouse Spa offers Upper Class passengers one free treatment; I opted for a facial and really enjoyed being pampered. The flight was called in the lounge and the priority boarding queue for Upper Class passengers moved quickly. I was handed a bottle of water just after my boarding pass was scanned.

THE SEAT: Upper Class seats are angled diagonally and give all passengers aisle access. Seats convert to fully f lat beds and with a mattress pad, duvet and pillow, making for a great bed in the sky. Once f lat, the pods, which allow for a lot of privacy, offer a generous amount of sleeping space. Unlike other airline beds, you don’t have to cram your feet into a covered foot well and the arm rests don’t cut into your space. The TV screen is installed in the front and pops out on a moveable arm to allow for straight-on viewing. The in-flight entertainment system – a touch-screen TV monitor and handheld console – is easy to use and the selection of movies, TV shows, music and games is extensive. The foot rest, that becomes part of the lie-f lat bed, allows you to put your feet up even during take-off and landing, a feature I enjoyed. There are a number of storage spaces for things like your shoes and cell phone.

THE FLIGHT: We boarded on time, although we took off 30 minutes behind schedule. I was offered a newspaper and champagne once I was settled in my seat. As it was the inaugural f light, there was much celebrating on board, with a professional mixologist mixing drinks at the bar and a British singer/ song writer composing and recording a track. Despite the revelry and the fact that it was a daytime f light, I managed to catch a few hours’ sleep in possibly the most comfortable flat airline seat I’ve ever flown in. Between take-off and my nap, I ate a delicious lunch – butternut salad for starters, seared salmon fillet with herby crushed potatoes and olives for mains, and warm chocolate salted caramel pudding for dessert. I passed on the cheese plate in favour of sleep, but I did pop by the Wanderwall for a Hershey chocolate bar and a bag of marmite popcorn just before landing. I signed up for onboard wi-fi at £5 for 50MB to catch up on emails. The whole process was easy and the speed was impressive.

ARRIVAL: We touched down at Tacoma International Airport at the South Satellite terminal on time. Sir Richard Branson was waiting at the airplane door to welcome passengers to Seattle – a very special surprise. Immigration control moved fairly quickly, but there was a fairly lengthy wait at the carousel for the luggage to be off-loaded. Once I collected my bag, I jumped on the inter-terminal train to the main exit.

VERDICT: A solid trans-Atlantic service with a great onboard product, especially in Upper Class.