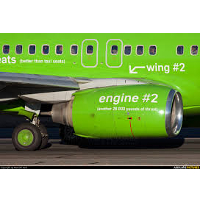 BACKGROUND: Comair Limited is an airline based in South Africa that operates scheduled services on domestic routes as a British Airways franchisee. It also operates as a low-cost carrier under its own kulula.com brand, which began operations in 2001 and now connects six South African cities with numerous flights daily. It also has a codeshare with Kenya Airways, for flights into Nairobi. The low-cost model hinges on high load factors, so the kulula routes in South Africa are limited to the most popular cities – Johannesburg, Cape Town, Durban, George, Port Elizabeth and East London. My flight on the evening of Easter Friday was close to one hundred percent full, but George is definitely a popular destination for Jo’burg residents, so this route usually runs near full capacity. Flying time is just under two hours and the George Airport is located conveniently enough for business people living in nearby Knysna to make weekly commuting quite possible.

PRE-FLIGHT & CHECK-IN: Although online check-in is available, I decided to check in at the counter at O.R. Tambo International Airport, in the hopes of securing an emergency exit row seat, an option that wasn’t available online. Being the Easter weekend, the plane was full, but I was lucky enough to be assigned my preferred emergency exit aisle seat. I also checked one bag into the hold. Kulula offers a single piece of checked luggage with a standard ticket, so while you can take your bag as hand luggage (weight and dimensions permitting), you don’t have to skimp on clothes, shoes or toiletries if you don’t want to. You can also pay for additional luggage if you’re not travelling light.

LOUNGE & BOARDING: Since kulula is a low-cost airline, tickets don’t include lounge access. There are a number of lounges at ORTIA that accept walk-ins, but you will have to pay for the privilege. I decided to forgo the lounge in favour of a large cappuccino – purchased at one of the nearby coffee shops – which I enjoyed at the gate while waiting to board. Vida e Caffè has a presence both upstairs – just past security – and downstairs at domestic departures. The flight was delayed by about 45 minutes, a fact that was printed on the boarding pass I received at the check-in counter, and the boarding area filled with passengers anxious to start their long weekend. Once the gate opened, passengers were processed with moderate speed. I joined the tail-end of the queue and settled into my seat without fuss.

THE SEAT: Kulula operates a fleet of Boeing 737-800s with a 3-3, all-economy layout. Seats are about 17 inches wide, with thick, solid arms in most cases. It was a bit of a squeeze for my over-large frame, but not overly uncomfortable. In-flight entertainment is limited to the on-board magazine khuluma, I’m afraid. You can operate electronic devices while in the air, so it is possible to use your phone or tablet to watch movies or listen to music. Honestly, though, this wasn’t a concern for me, and didn’t seem to bother other passengers.

THE FLIGHT: Once we had pushed back and were in the air, the flight proceeded smoothly. The cabin crew brought out the catering trolleys about half an hour after take-off. If you fancy something to eat or drink, you have to pay for it. I bought a chicken mayonnaise roll, which was tasty, and washed it down with a cold drink. I perused the on-board magazine and then napped for much of the remaining flight time. The extra legroom in the emergency exit row certainly made my flight more comfortable – if I can’t have the width, I’ll take all the length I can get.

ARRIVAL: We landed at George Airport 30 minutes later than originally scheduled, having made up a little bit of time in the air. It’s a short walk from the aircraft to the terminal building, which didn’t allow much time for the crew to offload luggage before passengers descended on the carousel, eager to gather their belongings. Given the number of bags that needed handling, the crew managed to empty the hold in pretty good time. From the carousel, it’s just a short walk to the parking lot, where my ride was waiting.

VERDICT: A cost-effective, no-frills option, if you need to get to George and are watching your pennies.