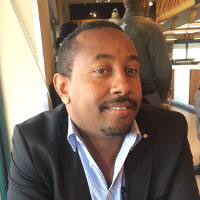 Ethiopian Airlines is already one of Africa’s big players, serving 52 destinations on the continent and a further 42 abroad. But it also has plenty of ambition, having recently taken delivery of its first A350, with plans to further bolster its fleet and route network. All part of a greater vision says Abel Alemu, the airline’s Regional Manager for Southern Africa.   Ask Abel Alemu what he believes African aviation – or more specifically the airline industry’s – greatest challenge is, and he doesn’t even blink. This pesky issue of so-called ‘open skies’, or rather, as he puts it, “the regulatory framework relating to operating permits and flight frequencies.” It’s all part of the broader issue of Africa’s air space being closely guarded by individual governments looking to protect their own turf. According to Alemu, they are doing this to the detriment of the development of the African airline industry, whilst at the same time inviting in international carriers – such as the aggressive (in terms of growth) Middle Eastern airlines – and not protecting their own. “Only 14% of the African market is taken by African carriers,” says Alemu. “The remaining 86% is by airlines that are based somewhere else. If we want to defend our skies, we have to have a conducive environment for African carriers so that they can properly survive the market.” According to Alemu, only four African countries – South Africa, Kenya, Ethiopia and Egypt – are showing any will and intent in driving a continental open skies or ‘liberalization’ policy – as promoted by the Yamoussoukro Declaration/Decision. “The original idea was to protect the national carrier, but most African countries don’t have a strong national carrier,” says Alemu. “So, it’s being protective of an airline that you favour and then placing a blockage to the other airlines in the market.” “Those four countries all have strong national carriers, so to lead the way these countries need to open their own skies first to the rest of Africa, so that the others will follow.” I’m sure that Alemu would like to see other big players such as Nigeria join that list of countries, particularly as it is such an important market for Ethiopian Airlines. At one stage, according to Alemu, Lagos was the airline’s most important route, with something in the region of 30% of the airline’s total revenue coming from Nigeria. “We’re like a national carrier to Nigeria,” says Alemu. “We fly to four cities and it’s a very significant market, with the airline mainly connecting Nigeria with the Middle East and Far East.” But there are other ‘significant’ markets and targets on the radar for Ethiopian, including growing its fleet and taking the passenger experience to the next level. Ethiopian Airlines believes it is doing this by adding the Airbus A350-XWB to its stable. It’s an interesting move, considering the fact that the airline has a long-standing relationship with Boeing. “That was a big move that surprised everyone,” says Alemu. “But, the main reason for this aircraft is that we want to give something better to our passengers. The A350 is currently the best for all the features and technologies. The Dreamliner was the first, before the coming of the A350. Now the A350 has better amenities and gives a better experience to passengers.” According to Alemu, those amenities include greater seat and cabin space and an incredibly modern in-flight entertainment offering – passengers can connect their own devices to the IFE. He also touches on something that aviationweek.com references as the aircraft’s “pressurization, which is increased to as much as 9.4 psi, resulting in cabin altitudes as low as 6,000 feet at the aircraft’s maximum cruise altitude of 43,100 feet, to help reduce fatigue.” “You don’t get that heady feeling,” says Alemu. “They decompress the air in a certain way so that you feel less tired. That is one of the major selling points.” Ultimately, though, it’s not just about passenger comfort, but also efficiency. “We can save up to 25% fuel compared to the old aircraft,” says Alemu. “That’s a big cut for us.” Ethiopian has already taken delivery of two A350 aircraft, with another 12 on order. Quite simply, it has a plan, it has goals, and it is confident of achieving them. “Our ‘Vision 2025’ is that we’d like to be the leading aviation group in Africa, with $10 million annual turnover, 40 aircraft, 120 destinations, and 820 tonnes of cargo,” says Alemu. Fair enough. Dylan Rogers