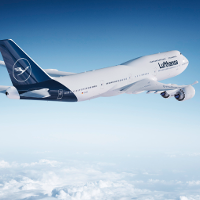 In February 2018, Lufthansa revealed a new, modernised brand image to all customers. On the occasion of the 100th anniversary of the crane, every detail of the design was reworked – to meet requirements of the digital age. The new Lufthansa appearance gives the individual elements a new, modern quality to sharpen their impact.

The most visible change is the new aircraft livery. The crane, designed exactly 100 years ago by graphic artist Otto Firle, a distinctive icon in the sky, remains the airline’s iconic symbol. In the future, it will be slimmer and fit for the digital world. A thinner ring makes the crane look more elegant, bringing it into the foreground and granting it more space. All in all, the trademark will gain lightness and elegance. The familiar blue-yellow colour combination of Lufthansa will also be retained – but the use of these primary colours will be redefined. The blue specially developed for Lufthansa is somewhat darker, more elegant and is becoming the leading brand colour. It stands for reliability, clarity and value.

The new livery made its first appearance in South Africa on the 12th of February when it landed at OR Tambo International Airport.”We are excited that the only Boeing 747-8 bearing the new livery has already touched down in South Africa. It is a very proud moment for the Lufthansa Southern Africa staff as the new livery is becoming more visible across the world since its official launch in February 2018, in Frankfurt and Munich. We are also pleased that the South African market was one of the first markets to receive the new livery, another demonstration of our continued commitment to the country”, says Dr. André Schulz, General Manager for the Lufthansa Group, Southern Africa. Against the backdrop of digitalisation and changing customer requirements, Lufthansa recognised the need to modernise the aircraft appearance in order to remain up to date. Lufthansa was awarded the Platinum Award by the International Air Transport Association IATA for its new digital services and is the first and only airline in Europe to be awarded the 5th star by Skytrax. In the cabin, guests will encounter the modernised design within the crew’s uniform in the form of new – and often yellow – accessories. On-board articles such as tableware, amenity kits, blankets or pillowcases will carry the new design in future. Around 160 million items will be exchanged over the next two years.

Openness and curiosity – the launch of the new Lufthansa brand marks the start of a new global #SayYesToTheWorld brand campaign. It questions familiar ways of thinking and habits. Lufthansa opens up the world to all explorers. In one sentence, “Say Yes To The World” manifests into openness and joy. “Yes” is positive and embraces life. “Yes” is cosmopolitan and has no prejudices. “It is also an appeal to question patterns of thought and habits. We make people do this by asking them questions that aim to make people aware that it is worth going through this world openly”, comments Jeffrey Harrison, Marketing Manager for the Lufthansa Group, Southern Africa.

You can explore “the New” now with a video tour of Lufthansa’s entire new design from conceptualising, to the final product. Visit www.explorethenew. com today to experience the new world of Lufthansa.