Each year the Lagos-based W Hospitality Group, an industry constant, publishes their Hotel Chain Development Pipelines in Africa report and analysis. This is the 13th year they have produced a report, which they describe as “something of a curate’s egg’, with good news and bad.

Looking forward this time last year, it was inevitable that the COVID-19 pandemic would result in a slowdown in pipeline growth, as the industry got to grips with the new reality. With so many of the players locked down it looked like fewer deals could be signed, and that has proved to be the case. Whilst the crisis had a profoundly negative impact on Africa’s travel and hotel operations, the impact on deal signing was, surprisingly, much less, down “only” 30% on 2020.

Whilst the continued activity by the chains in expanding their footprint contributed to an increase in the 2021 pipeline, another factor was the inevitable reduction in the number of hotels opening last year. At the beginning of 2020 it was anticipated that 90 hotels with 17,000 rooms would open across Africa during the year, but in the event only just over a quarter of those opened their doors. Delays were for many reasons, all pandemic-related, including construction site closures, cargo delays, lack of finance and, for those projects which were completed, the lack of any demand in the market. Much of this was due to an unprecedented level of government regulation and legislation, which is continuing to impact on hotel development and operations.

Here are the main findings of the study.

This 13th edition of our annual survey has a record 40 international and regional (African) contributors, reporting pipeline activity of just around 82,000 rooms in 447 hotels as of Q1 2021. 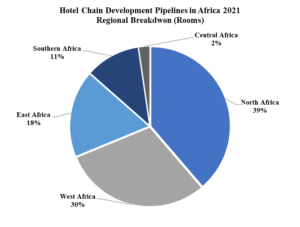 The total is up just over 5% on 2020, which whilst positive in terms of continued signings is also a function of far fewer hotel openings last year – 25 properties (a record low) compared to 68 in 2019.

There has been growth of almost one quarter (22%) in the total pipeline rooms since 2017, with growth in North Africa, particularly in Egypt, far higher, at 34% compared to sub-Saharan Africa’s 17%. West Africa is, as ever, the largest region in sub-Saharan Africa, with 49%of the regional pipeline (30% of the African total), which is up from 47% last year.

When analysed according by country and by the number of rooms in their pipeline, the top ten countries represent 71% of the total hotels in the survey, and 76% of the rooms.

Egypt has, as in several previous years, by far the largest number of rooms in the pipeline, well over double the number in second-placed Nigeria, due to a continued deal-signing spree, led by Accor and Marriott, the former signing six deals with about 1,320 rooms there in 2020, and Marriott three hotels with about 1,050 rooms.  Four Seasons and Radisson signed one apiece.

After a couple of years of decline, the pipeline in Nigeria increased by a massive 16% last year, with signings by Best Western, Radisson and Swiss International, as well (of course!) by Accor and Marriott. Morocco, in third place, has seen a 10% increase in pipeline deals, up from 5,530 rooms in 2020.

Cairo has by far the largest pipeline, followed by Addis Ababa, with Nairobi, Lagos, Hurghada and Abuja all at much the same level 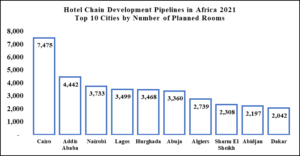 There is a clear gap between the first two (Accor and Marriott International) and the next two (Hilton and Radisson), and between these top four and “the others” – the top four chains account for fully two thirds of all of the pipeline rooms! And these top 10 chains have just over 80% of the pipeline, with the other 28 chains each having an average of less than 1% of total rooms.

In absolute terms Accor had the highest net increase in its pipeline, 2,400 rooms, and signed 14 deals in 2020. Radisson saw a net reduction in their pipeline, due to openings, whilst Marriott signed 9 deals and achieved a 5% net increase.

Marriott and Accor are the top two hotel chains when ranked by pipeline status. The Top 10 combined have almost 80% of all the chain hotels under construction in Africa, and the top four – Marriott, Accor, Hilton and Radisson – account for 58% of the total.

The chains anticipate that 99 new hotels are expected to open this year, and 115 in 2022, although their expectations are often over-optimistic – after a positive trend in 2019, the actualisation of hotel deals (the proportion that opened, compared to what the chains expected to open) was less than 30% in 2020.

That’s over 34,000 rooms expected to open by the end of next year which if realised will contribute substantially to the much-needed improvement in the quality of Africa’s hotel industry, and creating those much-needed jobs.