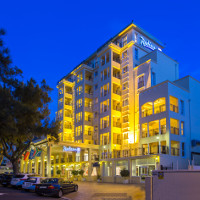 BACKGROUND: The Carlson Rezidor Hotel Group operates five hotels in Cape Town, with three Radisson Blu (including the recently-opened Radisson Blu Hotel & Residence) and two Park Inn by Radisson properties. Later this year the group will open the first Radisson Red in the Middle East and Africa, which will be situated at the V&A Waterfront in Cape Town. The Radisson Blu Le Vendome Hotel was formerly the Hotel Le Vendome and re-opened in 2015 after extensive refurbishment.

WHERE IS IT? The hotel is located in the popular area of the Platinum Mile in the suburb of Sea Point. It is only 50 metres away from the Sea Point Promenade and two kilometres from the Waterfront. Cape Town’s city centre and Table Mountain are located within a five kilometre radius of the hotel, whilst the distance to the airport is 25 kilometres.

ROOMS: Radisson Blu Le Vendome has 142 rooms and suites, with the rooms made up of standard, superior and business class rooms, and the suites divided between junior, executive and royal suites. I was accommodated in a junior suite, which, as a single traveller, was arguably more than I needed, but nonetheless very comfortable. I say I didn’t need it, but the reality is that having two separate rooms to divide between work and sleep is rather nice. These suites are 50m2 in size and my living area was spacious, with full lounge suite, large flat-screen TV, food and drink area (including stocked mini-bar, tea/coffee station, and Nespresso coffee machine), and a work desk in the corner. But the real jewel was the balcony that led off that, offering me views of the Promenade and sea to the front and the Lion’s Head mountain to the back. Here I enjoyed a cold beverage and the view, whilst catching up on email thanks to the speedy wi-fi. The bedroom was fairly standard, with comfortable king-size bed, another flat-screen TV, luggage stand, and large bathroom with separate shower and bath. My only issue was with the two remote control units, which were either old or just didn’t work very effectively.

RESTAURANTS & BARS: The hotel has two restaurants in the form of the all-day #add Restaurant & Pool and the La Mer Restaurant & Grill, which is only open for dinner, Monday to Saturday. I did not make use of the latter, due to a couple of long work days resulting in room service only. Fortunately, I discovered the hotel’s cheese burger off that particular menu, and found it so delicious and perfectly cooked that I had it both nights! In terms of #add Restaurant & Pool, I used it for breakfast both days and the offering was extensive, with both plenty of hot and cold options. The coffee was a little slow in coming, but my combo of scrambled eggs, bacon, croissant and cheese went down a treat. Just a word of warning – if you sit outside by the pool, don’t leave your food unattended, as the resident seagulls are quick to pounce!

BUSINESS & MEETING FACILITIES: The hotel has three multi-purpose conference rooms spanning over 460m2 with natural daylight and beautiful views. The smaller spaces are ideal for intimate board meetings, but they can be combined to support larger gatherings of up to 220 delegates. There’s also an all-day business centre with printing, scanning and photocopying services, and complimentary wi-fi.

LEISURE FACILITIES: There’s a fitness centre, on-site boutique with clothing and accessories, and a free shuttle service to the V&A Waterfront, which is a nice touch and particularly useful if you have time to shop or want a night out at one of the many restaurants and bars there. Additional services include off-street parking, 24-hour security and a concierge service.

VERDICT: I did request an early check-in that wasn’t quite ready when I arrived, but besides that, the hungry seagulls and dodgy remotes, this was a first class stay and a hotel to recommend, should you be happy being out of the CBD and Waterfront. Trust me, it’s worth it.