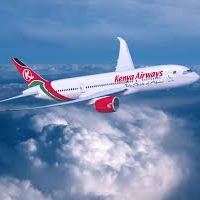 Background Kenya Airways flies to 41 African destinations and a total of 62 worldwide. It’s one of the biggest and fastest-growing airlines in Africa, and its service between Johannesburg and Nairobi is three times daily, Monday through to Sunday. Check-In I arrived at O.R. Tambo International Terminal A at 11h15 for my 13h20 departure, and with little or no queue, I checked in, dropped off my bag, and went through security and immigration. Lounge I was given access to the Bidvest Premier Lounge, which is located close to gate A03, where the flight was scheduled to leave from. The lounge is spacious, with plenty of seating, tables and plug points. The food was fairly unexciting, with two pastry options, vegetable soup and a few salads, along with muffins and croissants. The highlight was perhaps the chocolate brownie, but not for my waistline! Importantly, the Wi-Fi was speedy and the location perfect, whilst there was also a vast array of drinks available. Interestingly, the lounge offers a couple of boardroom-type tables, should you need to convene a quick meeting. Boarding We were scheduled to board from 12h30 and fly at 13h20, but that was delayed for an hour. The cause was apparently some incomplete paperwork, but that was only communicated to passengers around 13h20. That should have been communicated sooner, particularly with a restless crowd gathered at the gate. When we did board, my jacket was taken and I was offered orange and apple juice, champagne and water. The Seat This Boeing 767-300ER featured 20 Business Class seats in a 2-1-2 configuration. I was initially placed in 1G, one of the aisle seats in the first row. But, fortunately, Business Class was not full on the day, so I moved one row back and claimed the window seat, 2J. I thought the seat itself was very comfortable, and even though it didn’t recline fully, it was more than enough for me to lie down and catch some shut-eye. Which Seat To Choose? I would avoid rows 1 and 4, as they are the closest to the galley and toilets, respectively. Thereafter, it’s a question of whether you fancy a window, an aisle, or rather the slightly more private middle seat – 1D, 2D, 3D or 4D. The Flight We took off at approximately 14h15, and although it was late, the pilot explained that an attempt would be made to make up time. That was achieved, as we landed only 20 minutes late. Shortly after take-off, I was presented with a hot towel and a menu, and a drinks order was taken. Those drinks and some nuts were served, before the arrival of the starter, which took the form of soufflé vegetables, palm heart cocktail, lettuce and terrine polenta almond. I found it a little bland, but my main course of beef fillet seared, onion demi glaze sauce, baby potatoes, roasted carrots and green peas, more than made up for it, with the steak cooked to perfection, around medium/medium-rare. The other main options were the chicken breast with creamy white sauce, papardella pasta, green beans and yellow pepper, and the vegetable lasagne, with basil tomato sauce, grilled baby marrow and red pepper. Dessert was in the form of chocolate cake, farmhouse cheese or sliced fruit. I went for the cake, and it was one of my better decisions. I stuck with water and decaf coffee, but there was also the option of a wide array of wine, spirits and beer. With regards the inflight entertainment, it looked fairly basic and certainly wasn’t ‘on demand’. I caught the tail-end of a movie, but my audio connection wasn’t fantastic, so I just decided to stick to getting some work done on the laptop. Arrival Business Class passengers exited first, and I headed swiftly for immigration. Fortunately, I was first in the queue, breezed through with no problems, and about 15 minutes’ later picked up my luggage. Verdict A comfortable African long-haul product that I’d happily use again. Dylan Rogers CONTACT www.kenya-airways.com