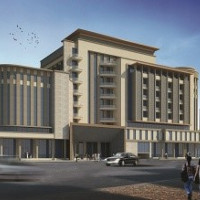 According to Breaking Travel News, Mövenpick Hotels & Resorts has signed its first hotel in Ethiopia as its expansion in sub-Saharan Africa gathers pace.

Slated to open in Q4 of 2019, Mövenpick Hotel Addis Ababa will be located in the city’s exclusive Bole district, just 2.5 kilometres from the international airport.

The hotel will feature 252 rooms, an expansive ballroom and state-of-the-art well-being facilities.

The management agreement represents another step forward for Mövenpick’s strategic expansion plans for Africa, following on the heels of last year’s opening of Mövenpick Hotel Mansour Eddahbi Marrakech and the signing of new projects in Tunisia, Kenya, Nigeria and Cote d’Ivoire.

With growth averaging 10.8% since 2005 and projected to remain at seven to eight percent until 2020, Ethiopia is one of the world’s fastest-growing economies.

Following a momentous year in 2016, Mövenpick Hotels & Resorts has continued its rapid expansion this year, with the Addis Ababa signing taking the total development pipeline to 35 hotels worldwide.