Located on Heerengracht Street in the Cape Town city centre, Signature Lux Hotel Foreshore is conveniently situated on the MyCiTi bus route and offers guests a complimentary daily shuttle service to and from the airport and the V&A Waterfront. 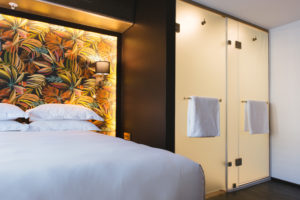 The hotel has 157 rooms, a bar and a ‘trendy-but-tasteful’ dining area where guests can work and relax.

“The initial concept was to create a product which is of a four or five-star environment and feel, but also economically viable for guests,” says Paul Kelley, co-owner and developer of Richland Properties. “If you want to be close to the Waterfront or Cape Town International Convention Centre, it’s going to cost you a lot of money. It’s become almost standard practice for Cape Town hoteliers to hike the price of their hotel rooms in peak season and when there’s a popular event at the CTICC, adding to the burden of anyone looking for a premium hotel.”

Catalyst Hotel to open in Sandton

January 2020  We recognise and honour those brands and entities that performed with distinction in 2019 with the annual Business Traveller Africa Awards.