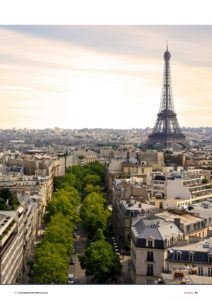 Paris has a long and interesting history, having first been settled in the third century BC by a Celtic tribe called the Parisii, which built a fortified settlement on the Ile de la Cite. It has been ruled by monarchs and democratically-elected presidents, and produced kings, artists, writers, philosophers, chemists, poets, playwrights, musicians, physicists and mathematicians, along with some stunning architecture.

But that all counted for nothing in April when one of its most iconic landmarks – Notre-Dame – went up in flames.

There were fears the 800-year-old cathedral would be completely destroyed during the fierce blaze on the 15th of April. Firefighters managed to save the structure and much of its interior, but emergency work started almost immediately in order to stabilise the building.

The cause of the fire is still unknown, although it is speculated that it can be linked to the renovations that were underway at the time the blaze started. Plans are underway to restore the cathedral and Air France, the national carrier, has announced that it will provide free air transport for all official partners involved in Notre-Dame’s reconstruction.

The response from around the world has also been nothing short of astonishing, with hundreds of millions of dollars already pledged to the Notre-Dame reconstruction project, and in the process showing in what sort of esteem Paris and its iconic landmarks are held by the world at large.

Fortunately, Notre-Dame remains structurally sound and French President Emmanuel Macron has said he wants the notable Parisian landmark rebuilt within five years, in time for the 2024 Olympics, which will be held in the city.

The 2024 Games will be the third occasion Paris has played host to the Summer Olympics. It hosted the 1900 and 1924 Games and this centennial celebration will make Paris the second city to host the Olympic Games three times, along with London (1908, 1948, and 2012). Most of the Olympic events will be held in and around Paris, including the suburbs of Saint-Denis, Le Bourget, Nanterre, Versailles, and Vaires-sur-Marne, just outside the city.

Charles de Gaulle Airport is enormous, with the complex sprawling over 32 square kilometres. There are three main terminals and seven sub terminals inside Terminal 2, all of which are connected by trains and buses. It is Europe’s second-largest airport and processes nearly 70 million passengers per year. It is the hub of Air France, but also welcomes upwards of 150 other airlines.

So, CDG is big and busy and a tad confusing for first-time visitors. Once you reach passport control from your outlying terminal, the chances of a long queue are good. Immigration officers are fairly efficient, scanning and stamping passports with a minimum of fuss, but it takes a while to process the number of passengers arriving from all over the world.

When flying out of Paris from CDG, check your departure gate carefully to avoid wandering the acres of buildings, carparks and roads.

Air France has self-serve terminals for you to print your luggage tags and boarding pass, and you can drop off your bags without the aid of a staff member. In 2018, the airline inaugurated its 3,200m2 business lounge in Terminal 2E, Hall L at Paris-Charles de Gaulle. This lounge has one of the largest ‘well-being’ areas ever offered by Air France, with private saunas, Clarins treatment rooms, a dining area, and a detox bar.

As to be expected of one of the most visited cities in the world, Paris has an extensive hotel offering, and a good spread of properties catering to just about every corporate need and budget.

“Paris has a huge offering of meetings and conference spaces, and hotels and venues can facilitate almost everything you could need or want from a business trip,” says Scott Alboni, UK/EU Marketing Director of Corporate Travel Management, in an interview for the company’s blog.

In a report titled ‘Tourism in Paris – Key Figures’, it references the fact that there were a little over 119,000 hotel rooms in 2020 hotels in the greater Paris region in 2017. There were 16 new hotels built in that year, accounting for 1,626 additional rooms. In December 2017, the number of annual hotel arrivals in Greater Paris exceeded 23 million for the first time, nearly half of which were foreign nationals. Occupancy rates for the Greater Paris area sat at around 75%, showing that the new additional rooms were a sound investment.

By star grading, the mid-market (three-star) segment makes up the majority of establishments at 725, with the four-star segment taking second place at 435.

All the usual suspects are present – Hilton, Marriott, Radisson, InterContinental, Accor, Four Seasons, Hyatt, Kempinski – along with a number of smaller, non-branded guesthouses.

Apartment hotels are growing in popularity, with occupancy rates sitting at 79.2%. In 2017 there were 150 such properties offering 13,573 serviced apartments.

Another growing and popular accommodation option is Airbnb, with 84,000 listed properties in 2017, with 2.3 million visitors opting to make use of this service.

Paris sits in the north of France, almost equidistant from the country’s east and west borders. The city is circular, with the River Seine separating the south-west quadrant from the rest of the city.

There are a number of ways to travel around Paris without getting behind the wheel of a car. You can take the bus, tram, metro, train or a taxi.

Taxis are best ordered ahead of time and all operators charge a standard fee per trip (not per passenger, making it a fair option if you’re travelling with a colleague or two). This will get you to your destination with a minimum of fuss.

Public transport is definitely cheaper and very comprehensive, but is a bit daunting and confusing if you’re not accustomed to it. That being said, it doesn’t take long to figure out the metro – you just need to know the station you’re heading to and to pay attention to the announcements – and be prepared for a bit of walking. Thankfully, Paris is pedestrian-friendly, and you’ll join locals on your way to and from metro stations and bus stops.

The bus is a great way to get a little sight-seeing in while you travel, but you need to know which bus line to catch and where to hop off, otherwise you could get yourself hopelessly lost. It’s not as easy to navigate as the metro, but if you can find a helpful operator to give you directions, it’s worth it.

You will, of course, need to buy a ticket for your travels. Thankfully, the RATP website sets out your options in an easy-to-understand manner, so that you can decide which pass is the most suitable for you. Once you know what ticket you need, you can purchase it from a metro station vending machine or ticket desk.

The public transportation network continues to grow, thanks to major projects such as the construction of the Grand ParisExpress – the largest construction site in railway infrastructure in Europe – and the future CDG Express, which in 2023 will connect Charles de Gaulle Airport with the heart of Paris in 20 minutes by train.

Most African citizens require a Schengen visa to enter France. The French embassy in South Africa has appointed Capago as its visa application centre. The application process is simple and quick.

You start with an online application form, which you print out and take to a pre-arranged appointment at the Capago offices in Johannesburg, Cape Town, Durban or Pretoria. There is a stack of supporting documentation that you need to gather for your appointment, but this is clearly laid out in an email.

The appointment is basically a chance to hand in your paperwork and photos and have your biometrics recorded. Your passport is ready for you to collect, or have delivered (for a fee), in about 48 hours.

Paris welcomed 40 million tourists in 2017, with business tourism responsible for a large portion of this number, accounting for half of hotel overnights recorded in Paris in 2017.

According to the International Congress and Convention Association (ICCA), Paris was the second-most important international destination for congresses in 2017, with 1,110 of them organised in the city, mostly in the medical sciences and technology fields, and attended by 773,090 delegates. These events brought in €1.27 billion.

Venues include 17 congress and exhibition centres, around 100 meeting rooms, and even more classic, modern and unconventional venues.

In November 2017, the Paris Convention Centre of Viparis, in the Parc des Expositions de la Porte de Versailles, was inaugurated. With a capacity of 35,000, it is the biggest convention centre in Europe.

“To gear up for the 2024 Olympics and to retain its ranking as a world leader in the MICE industry, the destination is modernising its airports and developing new urban transport solutions,” says Pierre Schapira, President of the Paris Convention and Visitors Bureau. “It also has a brand-new congress centre, the biggest in Europe, designed to host major international events.”

Not just a desirable or romantic leisure destination, but a MICE location of note, with much to offer the open-minded delegate.

Air France is renewing all its cabins on its Airbus A330s in 2019. Thanks to an investment of €140 million ($157 million), 15 aircraft will be completely redesigned by 2020 and will be available on flights to Niamey, Cotonou, Lagos, Accra and Ouagadougou.

At Paris-Charles de Gaulle, Air France has multicultural teams familiar with the specific expectations of its international customers and a team of experts from Africa is present on all flights to and from the continent to provide commercial assistance to passengers, taking into account the geopolitical, commercial, regulatory and cultural characteristics of each country.

For the 2019 summer season, Air France-KLM is offering travel to 48 destinations in Africa and 548 weekly flights to the continent. In addition, since March 2018, Air France has been part of the joint venture agreement already in existence since 1995 between KLM Royal Dutch Airlines and Kenya Airways – a SkyTeam member – considerably strengthening the Air France-KLM group’s offering in East Africa. Air France, KLM and Kenya Airways customers can book code-share flights operated by one of the three airlines on the Paris-Nairobi, Amsterdam-Nairobi and return routes. Travellers benefit from 24 weekly flights between the Paris-Charles de Gaulle, Amsterdam-Schiphol and Nairobi hubs.

Air France is also the strategic partner of Air Côte d’Ivoire. In 2012, Air France supported the creation of this company, alongside the Government of Côte d’Ivoire, and currently holds an 11.1% stake. Air Côte d’Ivoire’s fleet currently comprises six Airbus A319/A320s, for which Air France provides industrial maintenance, and four Bombardier Q400s, allowing it to serve 24 domestic destinations in Western and Central Africa from its Abidjan hub.

10 – film shoots that take place in Paris every day
96 – food markets found around Paris
360 – events organised in Paris every evening
1,317 – art galleries in Paris
2,604 – shops selling ready-to-wear women’s clothing
2,800 – French songs written about Paris since the end of the 19th century
15,000 – people walk past the painting of the Mona Lisa every day
240,000 – bottles of Champagne uncorked at the Moulin Rouge every year
103,000 – kilometres the lifts at the Eiffel Tower travel every year