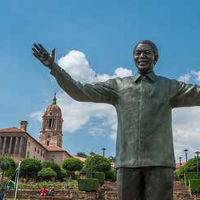 Known as the “Jacaranda City” due to its thousands of pretty purple jacaranda trees, Pretoria is a city within the Tshwane metropole and the Gauteng province. Pretoria is a major commercial and important industrial centre. Its main industries are iron and steel works, copper casting, and the manufacture of automobiles, railway carriages and heavy machinery. Politically, the last 18 months have been an interesting time for Pretoria, following the 2016 local government elections. In those elections, the ruling ANC party lost its majority in the Tshwane metropole, with the Democratic Alliance winning a plurality of 93 seats on the council, but without a majority. The minority parties then united with the DA to vote in mayoral candidate Solly Msimanga as the first DA mayor of Tshwane.

Arguably the most significant news for Pretoria in 2017 was that of Sun International unveiling the first phase of its multi-million dollar development, Time Square, in Menlyn. The complex, which includes a casino, an 8,500-seat arena, a hotel and a restaurant hub, opened to the public on 1 April. The arena opened in October and the Maslow Time Square hotel is due to open in March, offering a 238-room specialist business hotel with both ‘standard’ and premium accommodation. In other hotel news, the four-star Kievits Kroon – a popular conference venue –was purchased by the Faircity Hotels & Apartments group.

Depending on where you need to get to, the drive from Johannesburg is approximately half an hour, although traffic on the highway can result in delays. Otherwise, the Gautrain is a good option, particularly if you are travelling from O.R. Tambo International Airport. From the airport, change at Malboro – the second stop – for travel to Pretoria’s Hatfield and Pretoria stations. The latter’s Gautrain bus route travels through the Pretoria CBD and stops close to popular tourist attractions such as the State Library, Post Office Museum, Transport Museum, Cultural History Museum and Kruger House. The Hatfield station is located within the Hatfield Business Node and within walking distance are the Hatfield Plaza Shopping Centre and Hatfield Square, a popular open plaza surrounded by clubs and bars. The Hatfield station’s Gautrain bus route travels through Lynnwood, Arcadia, Waverly, Menlyn and Brooklyn.

For scheduled air services, Pretoria is served by Johannesburg’s O.R. Tambo International (45 kilometres) and Lanseria International (35 kilometres), whilst the city’s Wonderboom Airport primarily services light commercial and private aircraft. However, for the past two years Airlink has been offering scheduled flights from Wonderboom to Cape Town International Airport. It has also opened a business class lounge at Wonderboom for business class customers and selected Voyager members. Travellers can enjoy complimentary wi-fi and refreshments in the Airlink Grey Sunbird Lounge and the airline operates as many as four daily flights between Pretoria and Cape Town on some days, three on others, and daily flights on Saturdays and Sundays.

Interestingly, the only international group with a presence in Pretoria is Marriott, with a single Sheraton, one African Pride, five Protea hotels, and the Fire&Ice! in Menlyn. Otherwise, it’s the local groups that dominate, with City Lodge offering a Courtyard (four-star) in Arcadia, City Lodges (three-star) in Hatfield and Lynnwood, a Town Lodge (two-star) in Menlo Park, and a Road Lodge (one-star) in Centurion. Tsogo Sun also has a decent spread across the star range, in the form of the Southern Sun Pretoria, a Garden Court in Hatfield, a StayEasy, and a SUN1, which is the group’s budget brand. When Marriott’s Fire&Ice! opened in Menlyn in 2015 it was the newest entrant into the market, but it now has some competition on its doorstep, following the opening of The Capital Hotel Group’s apartment hotel property at Time Square and Sun International’s Maslow property, which is due to open in March.