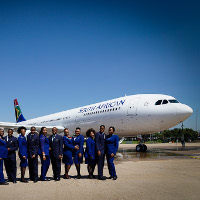 The aircraft represents one fifth of an order that will enable the airline to expand its current route network and improve its efficiencies. The remaining four aircraft are due to arrive later this month and early next year.

“This is an important milestone for us in the context of the implementation of our Long-Term Turnaround Strategy we unveiled three years ago. The new aircraft will bring much needed efficiencies and this is expected to impact positively on the company’s bottom line,” said SAA Acting CEO Musa Zwane.

Economy is fitted with 203 newly designed slim-line seats, all with extra personal space and legroom. Each seat is fitted with a 10.1 inch screen, individual USB charging ports and access to shared PC power points.