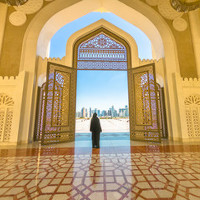 Its dichotomy of tradition and modernity is perhaps why the Qatar capital has garnered much attention in the recent past. Doha perfectly blends the old and the new; its rich history and glorious past greatly appeal to cultured travellers. Talking about the new, the region has recently opened the National Museum of Qatar, the Doha Metro and the revamped Doha Port that serves as a waterfront tourist attraction, attracting new-age visitors.

As far as tourism is concerned, Qatar welcomed 1.49 million visitors in the first three quarters of 2019, representing a 12% increase compared to the same period in 2018, that is according to the Qatar National Council’s 2019 Tourism Performance Report.

Rightly so, Doha’s hospitality industry is upping its game. The city has become a destination of choice for several international hotel chains that are seen setting up base here. A perfect example is the uber-luxe property Mandarin Oriental, Doha that opened its doors last year. The Luxury Collection also made its debut with Al Messila, a Luxury Collection Resort and Spa, Doha.

Looking at all this development, and initiatives like the Qatar National Vision 2030 that aims to “transform Qatar into an advanced society”, the time is here for Doha to establish itself as a non-negotiable pick in the business and leisure traveller’s list.

For any destination to successfully position itself as a key player in the business travel arena, excellent global connectivity is crucial. Taking this factor into consideration, Qatar is constantly evolving its flag carrier Qatar Airways’ international and domestic network, and inflight service.

Currently, the airline operates a modern fleet of more than 250 aircraft via its hub, Hamad International Airport (HIA), to more than 160 destinations worldwide.

More than a gateway

Speaking of HIA, the first image that comes to your mind is probably that of the Lamp Bear by Urs Fischer that takes centre stage in the grand foyer of the airport. And this isn’t it. HIA is one of the most architecturally significant terminal buildings across the globe, featuring a series of international and local. Its extravagant Passenger Terminal Complex offers attractive first impressions of Qatar.

Overall, the design aesthetics of the airport are reminiscent of Qatar’s natural environment and heritage. For instance, the HIA’s curve-shaped design is inspired by ocean waves and sand dunes. Inside, the shape of Emiri Terminal resembles that of a sailboat. The departure hall is an artistic glass wonder, featuring glass walls and stunning lights.

Apart from HIA’s self-check-in and self-bag-drop kiosks that provide passengers with a faster and smoother check-in process, the airport has also recently introduced 10 automated security gates at the pre-immigration area, so passengers can scan their own boarding cards and proceed to immigration, creating an autonomous travel experience.

Offering diverse attractions, from a tourism standpoint, Doha is a veritable hotbed of action. The city is blessed with abundant natural beauty such as palm-lined sandy beaches, majestic landscapes and a beautiful promenade, the Doha Corniche. In fact, for adventure lovers, the desert offers exciting excursions including dune bashing, safaris, and luxury camping experiences. And for those who wish to learn about the culture and history of the region, the Museum of Islamic Art and the National Museum of Qatar should definitely be a part of the itinerary. While the Museum of Islamic Art houses the largest collection of Islamic art, jewellery, patterns, textiles, and calligraphic items along with artefacts that date back to the 17th century, the National Museum of Qatar narrates the story of the evolution of the country from pre-historic times. If you are interested in architectural aspects of the city, make a trip to Abdulla Bin Zaid Al Mahmoud Islamic Cultural Centre, a cultural organisation in Doha. Located close to Doha Corniche, it is a prominent landmark in the city and is distinguished by its distinctive minaret.

The city is also renowned for its buzzing local markets and shopping malls. Souq Waqif is a major landmark in Doha, selling everything from everyday household goods, fabrics, spices to artefacts and souvenirs. There are also some other interesting souqs in the vicinity that are specifically dedicated to pets, falcons, camels and Arabian horses. The traditional and historical Qatari vibe at Souq Waqif comes alive during the evenings and keeps visitors entertained and satiated with its thriving food, drink and shisha scenes.

An authentic Qatari meal (that shares influences with the other Middle Eastern and North African regions) must be included on your visit here. Must-try dishes include balaleet (saffron-infused vermicelli rice) served with an egg omelette; khanfaroosh (fried saffron and cardamom cake); khobz regag (a type of thin bread) and harriss, an Emirati porridge.

If you want to experience modern Doha, then The Pearl-Qatar is the place to be. An artificial island, it is supposedly among the most glamorous addresses in the Middle East. The island is constructed on what was once Qatar’s major pearl diving site (this also boosted the country’s economy in a big way). On the island you will find an array of restaurants, shops, residential buildings; pedestrian-friendly squares and plazas, and a beautiful marina. For travellers, this is a great place to have fun with photography as each part of The Pearl-Qatar is modelled after a different part of the world. The main Porto Arabia area is modelled on Cannes, the Qanat Quartier on Venice and the Medina Centrale on Spain. Even the replica Rialto Bridge is quite an Insta-glory.

This integrated and sustainable island also makes for quite a fancy abode, as it provides residents with a multitude of amenities, lifestyle privileges and an eclectic mix of retailservices. Currently, the place boasts more than 750 retail outlets, including over 400 mid- to high-level retail brands, occupying more than 115,000m2 of retail space.

Doha has long established itself as a preferred MICE destination in the Middle East. Hence, every year, the city experiences a major flow of business tourists. The Qatari capital boasts some extensive convention centres and conference spaces that are in line with international standards. A case in a point is the Doha Exhibition and Convention Centre (DECC) that is a prominent multi-purpose MICE venue.

Located in West Bay, the hub of Qatar’s commercial district, the DECC offers a pillar-less event space, which can be divided into five exhibition halls. To cater to business travellers, the DECC also provides luxurious suites and majlis (council rooms).

The Qatar National Convention Centre was designed by the renowned Japanese architect Arata Isozaki and is one of the largest venues in the Middle East with conference and performance areas, exhibition foyers and VIP lounges.

Qatar is gearing up for its massive FIFA World Cup debut in 2022; and Doha is set to play a major role as one of the three host cities — the other two being Al Khor and Al Wakrah. Nearly half a million football fans are expected to visit the country during this period. Six of the FIFA World Cup Qatar 2022 venues are in Doha. These are Al Rayyan Stadium, Al Thumama Stadium, Education City Stadium, Khalifa International Stadium, Lusail Stadium and Ras Abu Aboud Stadium.

To date, Doha has hosted major championships such as the 15th Asian Games Doha 2006 and the 2011 Plan Arab Games, among others.

Situated on West Bay, The St. Regis Doha offers 336 guestrooms and suites with an Arabian-influenced décor and exceptional sea views. Rooms are equipped with an iPod docking station, a refreshment centre stocked with a variety of snacks and beverages and Remède Spa bath amenities. The hotel includes a range of events spaces, which features seven meeting rooms and the Grand Ballroom. Culinary options include the Oyster Bay & Bar; Opal by Gordon Ramsay and Astor Grill among others.

Located on the shoreline of the West Bay Lagoon district, the property features 249 rooms and suites, ranging from 40m2 to 205m2, and 91 villas. Accommodation categories include one King Bed Club Access, one King Terrace, a four-bedroom villa and a two-bedroom villa. All rooms are spacious, have a balcony or terrace, are equipped with modern amenities, and offer spectacular views of the green gardens or the private beach.

InterContinental Doha – The City is located in West Bay area, and is a short distance from Doha Exhibition and Convention Centre. Some of the accommodation categories of this property are Standard rooms, Executive rooms, and suites. The ballroom can be divided into three parts, with a capacity of 850 guests. There are also several other meeting venues including a private boardroom. The hotel’s event specialists help you with the entire planning.

Featuring a splendid façade, the Sheraton Grand Doha Resort & Convention Hotel offers 371 guestrooms and suites. Its leisure facilities include Sheraton Fitness (centre), an outdoor pool, a jacuzzi and indoor squash courts to name a few. The property is also ideal for hosting weddings as it is home to several event venues and outdoor areas.

This hotel is directly connected to the City Centre Mall, offering a plethora of shopping and entertainment options. Ideal for business and leisure travellers, the property offers elegant rooms and suites providing views of the city and the Gulf. The hotel also features varied culinary experiences from a range of international cuisines including a Greek restaurant, a Chinese restaurant with a club lounge and a Middle Eastern outlet.

Explore the city’s progressive spirit at The Ritz-Carlton, Doha, which is replete with modern accommodation, unique dining offerings and recreational amenities. Choose from one of the 374 well-equipped guestrooms with views of the city or Arabian Gulf. The 61 luxury suites and 42 club rooms are ideal for your leisure and business stay. STK Doha, B-Lounge Doha, Flamingos, Sel & Miel, a French Brasserie and The Lagoon form a part of their varied onsite dining establishments. Two ballrooms and six meeting rooms can be used for meetings and events. This is one of the finest addresses in the Qatar capital.

Situated in the heart of West Bay, Dusit Doha Hotel is a 20-minute drive from Hamad International Airport, and stands adjacent to the Corniche. This upscale, modern establishment offers 357 guest rooms, suites and apartments. Centuries-old Thai heritage and culture can be experienced through four fine dining venues, a rooftop bar and a lounge. Pamper yourself at the Devarana Spa, fitted with 17 treatment rooms and VIP treatment suites for solo and couples.