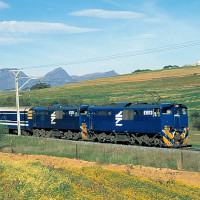 BACKGROUND: The luxurious Blue Train has its origins in the Union Limited and Union Express, which carried passengers between the mail ships of Cape Town harbour and the goldfields of the Witwatersrand over a hundred years ago. After being refurbished and modernised in the 1970s and 1980s a new Blue Train was introduced in 1997. In the following year a second identical train came into service, allowing The Blue Train to add Hoedspruit and Port Elizabeth to its destinations. In November 2018 The Blue Train launched its new brand repositioning, “augmenting the brand to meet the evolving needs of the discerning traveller” and its MICE offering for businesses.

ROUTES: The Blue Train’s main route is between Pretoria and Cape Town, but corporates on a private charter can travel to any other destination in the country where there is a working railway line. The Blue Train is ideal for board meetings, strategy sessions, office celebrations, annual executive conferences etc. Corporates can also hire the train for private charters on ‘A Trip to Nowhere,’ as well as on the Pretoria to Sun City route and on the Pretoria to Durban route. Other routes include Pretoria-Hoedspruit, Pretoria-Kruger Park, and the Garden Route. On A Trip to Nowhere, corporates can charter the train for 80 people for a lunch or dinner experience in Pretoria or Cape Town. This typically lasts six to eight hours and guests are treated to a five-course meal, open bar, and hand-made Cuban cigars, whilst onboard entertainment can be arranged.

CHECK-IN & LOUNGE: This was scheduled to start at 14h30 and we arrived at Cape Town station around 14h50. There we missed the main entrance (not great signage) and instead went around to the platform inside the station where we were met halfway down by one of the train’s butlers, who took our bags and directed us to the lounge. Tip: go round the back of Cape Town station and look for the signs directing you to “long distance” trains. There you’ll find a carpeted entrance to the lounge. There we checked in and were handed our tickets, before taking a seat and running an eye over the food available – mostly delicious-looking savoury treats. We ordered coffee and water and were a little disappointed with the cold instant coffee. Am sure The Blue Train could invest in a coffee machine for its Cape Town lounge.

BOARDING: Around 15h30 we were welcomed by the train’s manager and about 15 minutes later boarded and found our way to our suite. We were told that a butler would be round to orientate us, and in the meantime we unpacked our clothes and explored the various nooks and crannies. After some time I arranged a later time with the executive manager and my wife and I went off to grab a prime spot in the observation car, which has a nice, big window looking out the back of the train.

ROOMS: Your options are De Luxe (4m x 2m) or Luxury suites (5.1m x 2m) and we were accommodated in the former. By day it was a lounge with couch, side table, chairs and large window, and by night a double bed, with the conversion handled by The Blue Train staff when we weren’t in our suite. It seems some suites have double beds and some twin beds, and I would put in a request up front. Our double bed, with high thread count linen, was comfortable, but I seemed to roll around with the movement of the train, so I’d like to try the twin option to see if it’s more ‘contained’. In the same lounge space there was a cupboard with hanging space, shelves and a safe, further storage space above, and a TV that we didn’t make use of, whilst there was also air-conditioning, under-floor heating and a land line next to the bed, mainly for calling the butler. The bathroom was small, but beautiful done out in opulent marble and gold fittings, with a comfortable shower, basin and toilet, plus monogrammed towels and slippers. Some of the suites have baths instead of showers. We made use of the complimentary wi-fi in the room and had no problems.

THE TRIP: We were scheduled to depart at 16h00, but the train only got going around 16h45, which was a little bit of a shame as it was dark by the time we reached the Cape Winelands mountains, which we were told was one of the best views from train. Once it got dark, we grabbed a shower before dinner. Post-dinner we made our way to the smoking car towards the front of the train for a nightcap. After a lie-in, we were up for breakfast the next morning, followed by some reading and a mid-morning sleep, before heading back to the dining car for lunch. As per the schedule, we arrived in Kimberley around 14h00 and all piled into a minibus with tour guide. What followed was an interesting tour of the Kimberley mine and viewing of the iconic ‘Big Hole’, which takes your breath away due its size and scale. Thereafter, we were back on the train by 16h30, but only departed Kimberley station around 19h45, once dinner was underway.

FOOD & DRINK: Breakfast, lunch and dinner were served in the dining car and high tea in the lounge car, which has a bar. Dinner is a formal affair, with guests required to dress formally, but it’s worth it for the food alone. Just by way of example, dinner on the first night for me was a salmon and capers salad, followed by pepper-encrusted venison coupled with pistachio lamb cutlet and barley casing, and rounded off with the Swiss chocolate fondant with sorbet. For breakfast I opted for the Eggs Benedict and delicious fresh coffee, whilst lunch saw me wolfing down bobotie and yellow rice, before the next round of three-course dinner, which on night two saw me indulge in baked Scottish salmon with sweet potatoes, Asian vegetables and herb coulis. All of this, of course, in between glasses of quality wine over the two nights, the odd G&T, and me skipping the high tea, due to a rather full stomach!

ARRIVAL: After another lie-in and breakfast, we arrived in Pretoria at around 10h15 on the Monday morning. After disembarking, we had a short wait in the lounge, before our luggage was brought through and we were on our way.

VERDICT: Definitely a luxury experience and a real treat, with the food and dining service a particular highlight. There were just a couple of small details, such as the late departure and a few service elements that I feel could be brushed up and improved, to do further justice to the five-star experience.