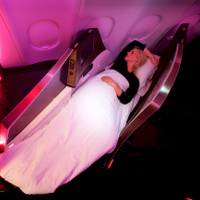 BACKGROUND: Virgin Atlantic began flying its Boeing 787 to Johannesburg in November 2015. The plane offers 31 upper class seats, 35 in premium economy and 198 in economy. The upper class cabin features a bar area where passengers can socialise and get a drink throughout the flight.

CHECK-IN: Queues at the check-in desks for the Sunday night flight were short, however it took me a while to complete the process. I wanted to check my luggage all the way to my final destination, Seattle, which, being a new route, wasn’t on the system. The problem was sorted at the ticketing counter, where I was given a code for a manual luggage tag. The staff were pleasant and helpful throughout the process. I joined the long queue for security and was airside 45 minutes later.

LOUNGE & BOARDING: The Virgin Atlantic Clubhouse, next to the Bidvest lounge, is compact, but given the number of people it needs to accommodate it’s a good size. During my wait, it wasn’t crowded and seating choices were plentiful. Wi-fi was free and easy to connect to, and plug points were readily available. The bathroom facilities consist of a small number of cubicles each with a shower, basin and toilet. The Clubhouse functions as an a la carte restaurant, with waitrons taking orders for your food and drink. The menu offers both light and full meals as well as kiddies meals. I sampled the crumbed calamari and spicy beef flatbread from the light menu and washed it down with a ginger and lemongrass cordial and soda water. All-in-all, a very pleasant place to wait for your flight. Boarding was announced and began on time, with a priority queue for upper class and premium economy passengers.

THE SEAT: Upper class seats are angled diagonally and give all passengers direct aisle access. Seats convert to fully flat beds and with a mattress pad, duvet and pillow, make for a great bed in the sky. Once flat, the pods, which allow for a lot of privacy, offer a generous amount of sleeping space. Unlike other airline beds, you don’t have to cram your feet into a covered foot well and the arm rests don’t cut into your space. The TV screen pops out on a moveable arm to allow for straight-on viewing. The in-flight entertainment system – a touch-screen TV monitor and handheld console – is easy to use and the selection of movies, TV shows, music and games is extensive. The foot rest, that becomes part of the lie-flat bed, allows you to put your feet up even during take-off and landing, a feature I enjoyed. There are a number of storage spaces for things like your shoes and cell phone.

THE FLIGHT: Once seated, I was offered a choice of water, orange juice or champagne and then a sleep suit. After an on-time take-off, the cabin crew took drink and meal orders. Drinks were delivered with a small bowl of crisps to tide passengers over until dinner. I decided on the roast red pepper and chilli soup for starters and seared fillet with spinach, butternut and fennel for mains. The fillet was served with a mushroom sauce, helping combat the dryness that usually accompanies airplane food. The meal was really tasty. I skipped dessert in favour of some shut eye. There was a fair bit of turbulence throughout the flight and the seatbelt sign went on a few times. The cabin crew was vigilant and checked that everyone was safely strapped in during these times. The breakfast service began about 90 minutes before landing. I placed my order on a menu card before retiring. I opted for the salmon frittata, which was light and full of flavour, and a cup of coffee.

ARRIVAL: The plane touched down on time and upper class passengers were first off. I made my way to the transit desks and was quickly on my way the Clubhouse in Terminal 3 with a boarding pass for my onward flight to Seattle.

VERDICT: The upper class seats offer a great night’s sleep. Couple this with great on-board service and entertainment, and you’ve got a winning product.