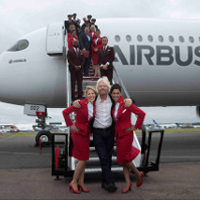 Virgin Atlantic has placed a confirmed order with Airbus for a dozen Airbus A350-1000 aircraft, for a total value of $4.4bn. Of the 12 firm orders, eight will be purchased and four leased, as Virgin Atlantic continues its investment into increasing the mix of owned and leased aircraft in its fleet. This order is part of a fleet modernisation program which will see 50% of Virgin Atlantic’s aircraft replaced in a six-year period. The A350-1000 is designed to be 30% more fuel and carbon efficient than the aircraft it replaces in the fleet and is expected to reduce the airline’s noise footprint at its airports by more than 50%. The A350-1000, which will replace Virgin Atlantic’s remaining Boeing 747-400s and Airbus A340-600s, is due for delivery from early 2019. The aircraft offers increased levels of comfort and reliability. The aircraft will operate on both business and leisure routes for Virgin Atlantic worldwide with a base at both London Heathrow and London Gatwick. Initially the aircraft will fly to key US destinations from London Heathrow. The A350-1000 will be delivered to Virgin Atlantic in two configurations – one for the business fleet seating up to 360 customers, and one for the leisure fleet seating up to 410 customers.