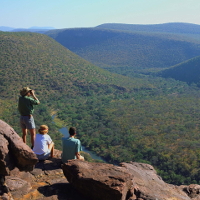 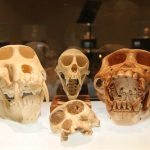 The North West province is known for its rich heritage and friendly culture-orientated Batswana people. The Taung Heritage Route marks a location of significant scientific importance such as the discovery of a 2.5-million-year-old fossilised skull of a hominid child found encased in limestone in the Buxton quarry in1924. The skull was named Australopithecus africanus, or ‘southern ape of Africa’. Spanning more than 45 kilometres, the route follows in the prehistoric footsteps of the hominid forefathers and gives a rare glimpse into the distant past and the region that early humans once called home. It takes in several natural wonders, such as a limestone waterfall and the Blue Pools, a collection of natural rock basins, streams and caves in a lush river valley. The German-speaking community of Kroondal, which dates back to 1857, can also be found in Bojanala in Magaliesberg. And while you’re there, visit the historic national monument of the Lutheran church built in 1896. The church is one of the 22 German Lutheran missions formed in the 1800s. You can take a tour of the tobacco and cotton research institute in town and then retire for a cup of coffee in the Kroondal watermill that was built in 1880, and has since been restored and turned into a restaurant. 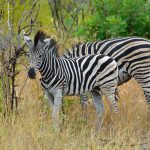 Getting closer to nature is the main focus of the Botsalano Game Reserve. The 5,800 hectare game reserve along the Botswana border is a breeding centre for antelope, white rhino and other mammals that are sold to reserves throughout the province. Activities at the reserve include game and bird viewing. Barbarspan Bird Sanctuary is 2,000-hectare body of water and home to 365 bird species. It has been declared a national bird site, with the pan being fed by the Harts River and makes an ideal migratory spot for waterfowl during dry season. Pilanesberg Game Reserve is encased in an ancient volcano crater formed 1.2 billion years ago, and its ecological richness makes it ideal for you to spot the Big Five in their natural habitat. The Manyane Resort caters for nature lovers and more conservative guests. It offers camp and trailer sites, safari tents for an authentic wild experience, and for conservative guests it has chalets equipped with all the necessary electrical appliances, including air-conditioning. The resort is next to the Pilanesburg Game Reserve, giving you easy to access to the reserve. 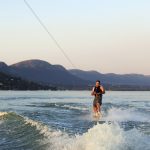 There’s much to do on and around Hartbeespoort Dam. Water sports are an obvious choice, with sailing, windsurfing, jet skiing, water skiing and parasailing among the most popular. North of the dam is an inland dive site at Miracle Waters. It extends 33 metres down an open-cast chrome mine. But there are many things to do on land as well. Hire a quad bike to explore the surrounding hills, or use leg-power to hike or bike the numerous trails. 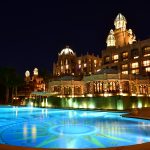 Sun City borders the Pilanesberg Game Reserve and is also situated in the extinct Pilanesberg volcano. The resort has a Gary Player golf course, a casino and a gaming complex. The Temple of Courage offers adrenalin junkies heart-stopping water chutes, where the brave can plunge almost vertically down nearly 100 metres of rock face, at speeds of up to 35 kilometres per hour. The Roaring Lagoon is a 6,500m2 wave pool that generates waves of nearly two metres. The Lazy River and the Royal Baths pool offer a more relaxed experience of the resort’s water activities. The walkways through the tropical forest give you an opportunity to discover and explore the Web Sway Bridge and the hidden cave. 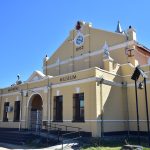 The Potchefstroom Museum documents historic themes like the Great Trek and the two wars of independence. The museum combines the cultural past and history of the area. It explains the three diverse characters of three men who were instrumental in the town’s history: Voortrekker leader Andries Potgieter who founded the town, President Pretorius who gave the town his name and Otto Landsberg, the town poet who had most of his artwork permanently on display in the town. The Cradle of Humankind set around the Rustenburg area is also a site worth seeing. The Mphebatho Cultural Museum in Moruleng Village is a chance to view and participate in the unique culture and history of the Bakgatla-Ba- Kgafela community living around the Pilanesberg Mountains. The museum is a community-based organisation located in Moruleng village, a 20-minute drive from Sun City. The Mafikeng Museum was established in 1985 in the former town hall. The hall was built in 1903 and still has its original pressed steel ceiling. Inside there are displays of the tribal origins of Mafikeng, old tools and crafts as well as herbal medicines. There is an entire room dedicated to the 1899-1900 siege of Mafikeng during the South African War, with photographs of the destruction left by shelling during the siege and three of the original seven pound guns used during the war.