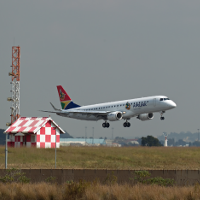 BACKGROUND: Long a feeder airline for its franchise partner South African Airways, privately-owned Airlink is growing into a formidable regional carrier in its own right, launching routes to key business and leisure destinations across southern Africa. Its strength has been identifying under-serviced city-pairs and niche routes, such as Cape Town-Upington and Johannesburg- Beira. But the airline also has larger ambitions, and has applied to fly to a number of key destinations dropped by SAA, with services to Libreville, Douala and Luanda in the planning. Operating a weekly (Saturday) flight to the island of St. Helena is the latest feather in Airlink’s cap.

CHECK-IN: I’d checked in online – a seamless process of seat selection and inputting passport info – and breezed through the short check-in queue. As expected, the check-in agents asked for my proof of medical insurance. Insurance is compulsory for all visitors spending more than 48 hours on the island, and island authorities recommend a minimum cover of £500,000 (approximately R8 million) to cover emergency evacuation. This is checked again on arrival in St. Helena. With the early morning departure (09h00), security and immigration were quiet and I was airside within 10 minutes of check-in.

BOARDING: Although there was little in the way of a formal queue, the ground crew handled boarding efficiently and we were all down the ramp in less than 10 minutes. There was some hold-up as passengers attempted to find space for their on-board bags. The Embraer E190 used on this route has surprisingly small overhead bins. Rather check that roller-suitcase into the hold and stick to a laptop bag.

THE FLIGHT: Airlink has dedicated a new Embraer E190 aircraft to the route. With business class seats in 1-2 configuration and economy laid out 2-2, it’s a spacious cabin that is more than comfortable for the six-hour journey from Johannesburg to St. Helena. We pushed back two minutes early, and climbed through a rainy Johannesburg morning. Once in the blue skies of cruise altitude, the first of two in-flight meals was served: a simple, yet delicious, choice of sandwiches and light refreshments. Roughly 90 minutes later we were descending to Windhoek’s Hosea Kutako International Airport. The outbound flight makes a refuelling stop at Windhoek, so that if weather conditions at the island are unfavourable for landing, the flight has enough fuel to return to another airport. With the plane refuelled, we took off for the three-hour- 25-minute leg out across the Atlantic to St. Helena. There’s no in-flight entertainment on this route, so pack something to keep you busy. I used the time to crack on with some work. There’s no in-seat power though, so make sure your laptop’s fully charged. With the coast of Africa behind us the crew was back down the aisle offering a light lunch: in my case a delicious chicken kebab, Greek salad, cheese and dessert. I was impressed by the on-board wines: the Alchemy range from renowned Stellenbosch estate Hartenberg offers an excellent Rhône-style red, and Chenin Blanc-driven white.

ARRIVAL: Building an airport on a wind-whipped island in the middle of the Atlantic brought its fair share of challenges, and the landing has become (in)famous for its wind-shear and turbulence. Despite warnings from both the captain and the cabin crew that the landing may be bumpy, we experienced just a few wingtip-wobbles before touching down on schedule. Holders of South African or British passports do not require a visa, though a £17 landing fee is payable.

VERDICT: The arrival of scheduled air services has transformed life on St. Helena, enhancing medical care and economic opportunities for the ‘Saints’ that call the island home, and putting this unique destination within easy reach for both business travellers looking to invest, and leisure visitors soaking up the history, scenery and island charm. This new six-hour flight beats a five-day sea voyage any day of the week!