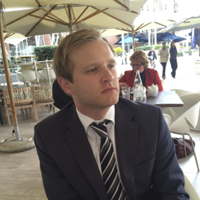 Ed Frost believes the global airline industry is in as tricky a place as it has ever been since 2008. That’s off the back of a period of consolidation, a slowing down in China, commodity prices decreasing, a plunging oil price, and uncertainty regarding the BRICS countries.

“A lot of people and businesses are holding back on making decisions, spending and travel plans,” says Frost. “That has created a perfect storm – we’ve got too much capacity in most markets and then a softening in general travel patterns and people willing to spend less.”

The big game changer, though, has been the oil price, which has dived about 60% since late-2014.

“It’s been a bit of a double-edged sword,” says Frost. “It’s almost lowered the barriers to entry for airlines that were previously unable to be competitive and profitable. What that has led to is a glut of capacity in the market.”

BA, as always, has had to take a closer look at where the greatest opportunities lie, and as with all airlines with extensive route networks, continue to review its position in the various markets it has a presence in.

One of these reviews led to the announcement in March that BA would be adding to its double-daily schedule from London Heathrow to Cape Town this year by offering three additional flights from Gatwick to the Mother City.

Gatwick may be considered a more leisure travel-focused airport, but Frost makes it clear that the decision to connect it with Cape Townwas not a one-dimensional one.

BA also has plenty in store for Johannesburg.

There will be an increase in capacity in October/November with BA going double daily on the A380 three days a week, with the other four days seeing a B747-400 Super High J.

“There will be 43 more Club World seats than the 747s at the moment,” says Frost. “This demonstrates our confidence in the business space out of Jo’burg. The additional capacity is going to be really important for us. We’ll be carrying about 1,000 people to the UK on each given day.”

In related International Airlines Group news, August will see fellow IAG airline Iberia make a return to Johannesburg after a four-year hiatus, with three weekly flights and a spanking new A330-330s product connecting travellers not just with Spain, but with the rest of southern Europe as well.

“The Portuguese community, for example, has been crying out for better air service and easier, quicker, efficient connections,” says Frost.

Another focus area for BA in 2016 has been promoting its OnBusiness product, a loyalty programme that recognises the needs of small and medium-sized businesses that have traditionally been ignored by the airline industry’s big players.

“I think it’s critical that we have an offering for those people who don’t always have the biggest budgets, who often shop last-minute, and who crave a little bit of flexibility and attention,” says Frost.

Also receiving some attention from BA is Nairobi, one of the airline’s longest-standing African routes. From 1 July to the end of October, BA is moving from a 777-300 to a 747 on the route. BA is also enhancing the catering offering with “a quick night-time service, so that people can get to sleep quickly.”

The 747 will retains its evening departure slot out of Kenya which, as Frost points out, “is critical for business flyers.”

The cuisine rotation on the Nairobi route is also changing from a quarterly to a monthly rotation and travellers will also see new china onboard – all little signs pointing to the BA faith shown in Kenya.

“I think the GDP growth forecast is in the region of 6 or 7% which is pretty good,” says Frost. “There are ups and downs, but I think we’re hopefully seeing a return to the best days of Kenyan tourism, travel, and business trends.”