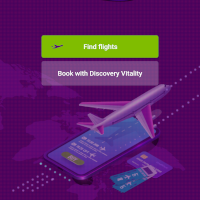 As kulula.com takes to the skies again in September, the airline has unveiled its new mobile app, which provides travellers the quickest, easiest way to book a flight with South Africa’s first low-cost airline.

“On average, it used to take our customers 23 minutes to book a flight. Our new kulula.com app saves you time, reducing this to 10 minutes,” says Avsharn Bachoo, CIO at Comair Limited. “The app provides you with every piece of information that matters, and has a simple, attractive interface to shop, book and check in for your flight.

“We have been listening to our customers’ feedback over the past year and we’re pleased to launch this app at a time when we can really help make air travel easier and more enjoyable for our customers.

Comair Limited has used the past year-and-a-half of lockdowns to transform its IT infrastructure, leapfrogging from legacy systems to state-of-the-art technology.

“The new kulula.com app has been built in the same way as Google Maps or Gmail”, says Bachoo. “In other words, the microservices sit on containers, able to scale up or down immediately, such as when there’s a rush on tickets for holiday specials. There are no more ‘waiting rooms’ or frozen pages.

“We’ve created a Cloud-centric rather than a standalone app. Using Flutter and Firebase rather than Xamarin is a gamechanger due to cost and ease of use. The end product may look the same, but there’s a big difference in the back-end.”

Long-term business benefits include cheaper maintenance and the ability to adapt and respond faster. The modular design of the app means that the airline group can keep plugging in other services whenever required.

In addition, the new API store brings multiple advantages to Comair Limited, allowing its business to integrate with multiple partners in the travel sector, including hotels and car-hire companies. “APIs allow businesses to easily use products and services from other organisations that would take too long to build themselves, lowering costs, and generating new revenue streams and innovations,” says Bachoo.

Over the past year, Comair Limited has partnered with Teraflow, a local data engineering and artificial intelligence firm, to modernise and re-design the group’s technology.  “It has been exciting to work with Comair Limited and see its commitment to innovation” says Brett St Claire, CEO at Teraflow. “Being a responsible and proactive business meant taking the opportunity to innovate during the pandemic and emerge with a competitive advantage.”

Download the app from the Apple App Store and Google Play.