Made in Africa - Business Traveller Africa

Home Archive Made in Africa 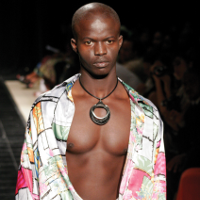 In a sandy residential quarter of Yoff in coastal Dakar, Senegal, Alpha Gueye is perusing patterns with a customer. A length of acid-yellow, wax-printed material with a pattern of golden birds billows across the tiny shop crammed with sewing machines, multi-coloured bobbins and stacks of magazines. “Fashion?” Alpha smiles. “Une Dakaroise will go without a meal for days to save her last [pennies] for a new dress!”

Dakar has long been known as the Paris of Africa. It’s the home of that legendary ‘queen of couture’, Oumou Sy, and where Senegalese women stalk the city streets like haughty birds of paradise in decadently patterned marinières (fitted tops and skirts), matching headscarves and high heels. The men are no less chic, sporting trendy jeans or grand boubous (long, loose-fitting garments worn by both sexes) in lustrous, colourful fabric. Down through West Africa it’s the same, from the effervescent fashion capitals of Abidjan and Lagos to trendy Accra and stylish little Lomé in Togo, where women in towering heels zip around the dusty capital on mopeds.

Designer names emerging from Africa are numerous – Fikirte Addis, House of Marie, Darryl Jagga, Studio One Eighty Nine, Maki Oh, Lisa Folawiyo, Maxhosa by Laduma, and Loincloth and Ashes are all being picked up internationally, first by celebrities, and now by consumers seeking something new.

Disu, who is originally from Nigeria and is now based in the US, launched Africa Fashion Week in 2009 after realising that African designers with more than enough skill, flair and quality to be global players were nevertheless invisible on the world stage. Mauritius and Nigeria but are marketed worldwide, encouraged to diversify their markets and form brand and product partnerships.

Sub-Saharan Africa’s apparel and footwear market was reportedly worth $31 billion in 2015, according to data from Euromonitor. Specifically, it was worth $215 million in Senegal, $4.7 billion in Nigeria, $549 million in Côté d’Ivoire, $1.1 billion in Tanzania, $1 billion in Kenya, and a whopping $14.4 billion in South Africa. Fashion weeks now take place in numerous African capitals, including Lagos, Dakar, Soweto, Johannesburg, Kampala, Kinshasa, Nairobi, Mozambique, Accra and Dar es Salaam (Swahili Fashion Week). Yet Africa’s fashion industry is still in its infancy. The figures could be so much bigger, Disu says.

“Africa’s fashion industry has started to expand,” she says. “This is largely down to a growing interest in what I evangelise as Africa’s core offerings – culture and sustainability. Plus, relationships between those promoting Africa’s development on the continent and those outside the continent have made our mission increasingly popular.”

The rise of the middle class across the continent; the fact that Africa is home to several of the fastest-growing economies in the world; the emergence and popularity of large luxury fashion malls; and the increasing global interest in African products, from homeware and furniture, to beauty and clothing, means burgeoning opportunities for independent designers. And with production costs rising in China, African countries have a real opportunity to seize manufacturing customers by offering competitive labour and manufacturing costs to global brands.

“I’m hearing whispers about Ethiopia,” says Loincloth and Ashes founder Anissa Mpungwe, who is based in South Africa). “From a manufacturing perspective, Ethiopian companies have a lot of support from government. Also, Kenya is a hub for manufacturing. One of the companies we’re in talks with is Soko Kenya – they manufacture for ASOS and Vivienne Westwood.”

Mpungwe, who founded Loincloth and Ashes in 2008 with a sewing machine, now employs a team of pattern cutters and seamstresses, runs a studio in Pretoria, and sells online to customers in Europe as well as Africa. The internet, she says, has revolutionised business for designers like her, breaking open traditional sales methods and allowing niche African brands to reach global consumers.

THE NEXT BIG THING?

Across Africa, independent designers are putting their business hats on. “The moment we start making business as important as creativity, things will change for African fashion,” says Senegalese designer Paco Ndiouly, of the Buuky House brand. He currently lives in Denmark, in an effort to market his clothing brand to world buyers. “So far, African designers have not aspired to get beyond Africa into other markets – Europe, America, Asia – but they need to be accessible and competitive on the world stage to be successful. Sometimes, that means coming to Europe.”

Mpungwe agrees. Four years ago, she took a break from showcasing her clothes on the catwalk to focus on sharpening up her business. “I wanted to take a deep dive into the business of fashion,” she says. “I realised we needed to focus on the business side, so that when buyers come, we’re ready. Now, I feel comfortable we can meet those deadlines. We are a serious proposition.”

Mpungwe admits she would love an international investor, but says such a person would be well advised to spend time getting to know any designer they are interested in. “Investors need to understand the heart of a brand,” she explains. “They can really bring a fresh eye, and having an investor affects everything – your business structure, how you distribute and market, how you manufacture. But this is a people business; it’s got to feel human.”

Disu advises investors to have patience, think long term, and be prepared to work with governments and private-sector businesses. “Investors should partner with players who understand the entire value chain, from smallholder farmers to fashion designers and retailers. Traditional fashion retail is still in its infancy in sub-Saharan Africa, so it’s probably the toughest market in the world. However, this creates an opportunity for investors.”

With African brands reaching global catwalks, designers believe textile and apparel suppliers need to establish long-term partnerships with buyers, and improve productivity. The hope is that national governments will support this by subsidising new equipment and training, as well as increasing access to finance for entrepreneurs and start-ups.

Meanwhile, Africa’s fashion industry continues to develop apace. “For sure, Africa is the next big thing in fashion,” laughs Ndiouly. “I meet a lot of people in Europe who are so interested in African fashion, because the market here is so saturated, yet in Africa there’s nothing. Africa is the future.”

Anissa Mpungwe launched Loincloth and Ashes in 2008. The Tanzanian-born designer moved to South Africa when she was ten, and her designs are inspired by different African looks and stories. She creates clothes for independent, powerful women that complement the female form.

“I’m now in my thirties and am lucky enough to be well travelled, so my culture, my upbringing, all these things have influenced Loincloth and Ashes,” she says. “Also, the understanding of Africa now, and the view of people outside Africa, really influences how I pick my patterns and what kind of silhouettes I use.”

Loincloth and Ashes sells within South Africa via its shop and the brand’s online store, which also serves customers from overseas. “Primarily we have customers from South Africa, a few from Nigeria and Tanzania, and the rest from Germany and England. We have quite a nice following there,” she says. She also works with big South African retail chains to create ‘capsule’ collections of essential items that appeal to consumers looking for something more affordable.

Mpungwe believes that the only way is up for the African fashion business. “‘We have so much here. For example, we want to go into crafts, so if we work with ethical clothing manufacturer Soko Kenya, then we would get the beadwork done here in South Africa,” she says. “I’m very pro-Africa, because we are able, we have the skills, we have so much potential – we can create good products. We just need to give ourselves the chance to develop certain skills to make it happen.”