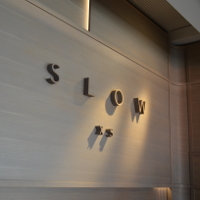 Comair Limited has launched SLOW XS, a new lounge at Lanseria International Airport to the north-west of Johannesburg.

SLOW XS is the latest addition to the suite of existing SLOW Lounge experiences across South Africa.

It will officially open at the end of August at Lanseria’s domestic terminal, and will be exclusively available to qualifying kulula.com, FNB, RMB and Comair Limited VIP guests.

The SLOW XS concept has been specifically designed to address the discerning traveller’s need for considered transit spaces within smaller airport environments, such as Lanseria International Airport.

The spatial constraints of its present location have led to a paring down of certain services, such as buffet catering, in-house spa and private washroom facilities.

Partnering with design agency UNKNOWN in developing and realising the lounge concept, the notion of scale was extended across a range of elements, from a limited edition volume of hand-made guest books and sustainability-sensitive reusable water bottles, to a taster-inspired menu, cold-brewed coffee selection and boutique, small-batch alcohol labels from micro-distilleries.