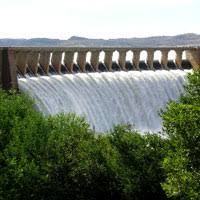 The Vaal Dam is located in the mountainous Free State province. It is stretched along the Maluti Mountains bordering Lesotho, near the sandstone cliffs and Basotho Cultural Village. This is South Africa’s second biggest dam by area and fourth largest by volume. The dam’s construction began in the early 1930s and was completed in 1938. If you are looking to enjoy water sports, the Vaal Dam offers boating, water skiing and swimming. There are a number of yacht clubs and two marinas around the dam and it also has its own island which hosts the annual Round the Island race, holder of the Guinness World Record for the largest inland yacht race. When it comes to accommodation the region boasts numerous great options including Tsogo Sun’s Riverside Sun and the Emerald Resort & Casino – dubbed Vegas on Vaal. Alternatively you can to stay on a houseboat and guide yourself along a cruise down the Vaal River. Sterkfontein Dam is another water getaway in the Free State and is part of an extended nature conservation area around the dam. It is characterised by rugged mountains, endless expanse and a lot of water. The Sterkfontein Dam offers water sports, along with walks and hikes, and fishing facilities in the dam. The 18,000 hectares of nature reserve around the dam is home to numerous bird life and is also rich in flora. Sterkfontein Dam reserve is ideal for sailing, angling, game viewing, biking and hiking.

Fun in the sun

The Free State National Botanical Garden is on the outskirts of Bloemfontein and covers 70 hectares. The garden is home to 400 species of plants, mainly from the Free State, Northern Cape and Lesotho. The natural areas of the garden are an attraction for wildlife, including 144 bird species, 54 reptile species and 32 mammal species. Gwen Bali Water World is for adrenalin junkies when it comes to pool activities. The facility boasts an array of water slides and pool adventures such as the super-tube, kamikaze slide or the two-lane racers. For more of the same activities and fun coupled with accommodation, head to the Maselspoort Resort on the banks of the Modder River, 23 kilometres from Bloemfontein and 13 kilometres from Bram Fischer International Airport.

The province of the Free State is rich in history and monuments from the past. The Oliewenhuis Museum was built in 1941 and renamed in 1971 for the abundance of wild olive trees growing on the surrounding hills. It was released to the National Museum to be converted into an art museum in 1985 and was officially opened as a satellite of the National Museum on 11 October 1989. The National Museum is regarded as the custodian of South African heritage in the judicial capital of South Africa, Bloemfontein. The museum has been in existence since 1877, when it began collecting and displaying rarities from around the world. Today it focuses on natural and cultural history as well as science and art. The museum on Aliwal Street has interesting attractions that include life-size fibreglass elephants, the only complete skeleton of Euskelosaurus, a working beehive, live snakes and other reptiles. Its Herpetology Hall also displays an extensive history of Bloemfontein/Mangaung area.

The meteorite impact in the Free State happened 2023 million years ago, leaving a crater that was about 300 kilometres wide. The Vredefort Dome is the biggest verified meteorite impact site and the oldest that geologists have found on Earth. The impact is nearly twice the size of the one that killed the dinosaurs 65 million years ago. This makes it a site of great importance for scientists. The sight has been proclaimed a UNESCO World Heritage Site, and guided tours are offered and highly recommended for the experience.

Fauresmith is the second oldest town in the Free State and the only town in South Africa where the railway line runs down the centre of the main road – one of only three in the world. The town is located 130 kilometres south-west of Bloemfontein and is known for the National Equestrian Endurance Race – an annual race in which as many as 300 horse and rider teams cover 200 kilometres over three days. The small horseshoe-shaped town’s name is a combination of surnames of Dutch Reformed Church moderator Reverend Philip Faure and the Cape Colony Governor Harry Smith. Fauresmith offers outdoor activities and also accommodates curious minds. The old steam train still looks out on the town under the main street’s lamp poles. The linear locomotive track was buzzing with railway activity until 1999.