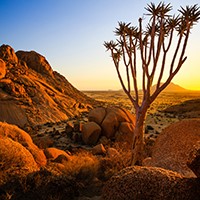 A close neighbour of South Africa, Namibia has always operated under the radar, but now appears ready to capitalise on its natural resources with a renewed focus on positioning itself as a tourism destination with much to offer.

Situated on the west coast of Africa, Namibia is a young country, having only gained independence in 1990 after German occupation and South African rule.

It’s a stable multi-party parliamentary democracy, with agriculture, tourism and mining forming the basis of the country’s economy. Fishing is another important industry, although exploitation of fishing stocks in the 1960s and 70s nearly extinguished all traces of pilchards and sardines. After strict rules were put in place, however, numbers began to rise once again.

Leisure tourism, in the form of game lodges and extreme sports offerings, makes a significant contribution to the GDP, and this is an area the Namibian government is keen to grow.

“The government has come on leaps and bounds in making travel and hospitality a key driving force within the country’s GDP,” says Vollenhoven. “The most recent Travel and Tourism Investment Profile and Strategy covering the period until 2026 indicates a strong move by the government to focus on tourism and develop Namibia as a leading African travel destination.”

“Tourism in general has received a lot more attention from government and its sizeable contribution to the GDP is top of mind,” says Rudie Putter, General Manager of AVANI Windhoek Hotel & Casino. “The Ministry of Environment & Tourism has established a council called the National Tourism Competitiveness Council, which is made up of appointed private sector representatives and government departments, with the objective to address issues that constrain tourism development and implement measures to optimize the tourism potential of the country, and the contribution it can make to the country’s fiscus.”

Apparently, this includes positioning the country as a favourable MICE destination.

“The tourism board’s focus is to drive and increase MICE business to the destination, as they see this as an untapped opportunity to grow the destination,” says Vollenhoven. “Namibia is also a very safe and visa-friendly country which will help the MICE market too.”

“The destination is excellent for the MICE market, due to the number of activities that the country offers,” says Graeme Edmond, Chief Sales & Marketing Officer for aha Hotels & Lodges, although he does identify some challenges that Namibia faces. “Access to acquiring a business visa or work permit can become challenging and there is not enough seat availability on flights, with the costs expensive. As it stands, there are only three airlines – SAA, BA and Air Namibia – operating from South Africa.”

“When it comes to business travel and MICE destinations in Namibia, the challenge is infrastructure,” says Rebone Motsatsi, Executive: Commercial for Avis Rent a Car Southern Africa. “Conferences and events need to be booked at least two years in advance. This comes as an undesirable stumbling block to further develop it as a business travel destination. Most business travellers seek convenience and a fast turnaround when it comes to conferencing facilities.”

So, one or two issues for the Namibian government to think about.

Hosea Kutako International Airport, situated 48 kilometres east of Windhoek, is the main gateway, with flights to domestic, regional and international destinations. It’s a modest single-storey building and home to a coffee shop, a mobile phone service provider for a local sim card, a small souvenir shop, a biltong hut, and a host of car rental desks, including Avis, Budget, Hertz, Thrifty and Europcar.

“The airport is due for an upgrade, which would be welcome,” says Vollenhoven. “The influx of new airlines to Namibia such as Qatar Airways, Condor, KLM, Eurowings and Ethiopian Airlines demands that these upgrades happen faster than anticipated. That being said, the more recently introduced biometric controls and chip passports, and the adding of more passport control points on entering, has made the airport more secure and efficient.”

Edmond, though, has a different view on these new services.

“It needs improvement,” he says. “In the initial stages, the new biometric system caused a few problems, taking approximately 15 minutes for each passenger to be scanned. In addition, there was not enough personnel to manage the process, which caused further delays.”

It seems that improvements to Hosea Kutako International Airport may have to wait.

“Upgrades to the airport have been on the cards for a few years now, but the process has hit obstacles, not least financial constraints faced by the government,” says Putter.

HKIA has two lounges, in the form of the Amushe (airside) and Oshoto (landside) lounges. The Amushe lounge is the newer of the two, having opened in late-2016. It is 214m2, can comfortably accommodate 55 passengers, and offers free wi-fi, plug points at each seat, a range of consumables, disabled facilities and showers.

Other airlines operating into and out of Windhoek are Qatar Airways, KLM and Ethiopian Airlines (all launched 2016), Eurowings (launched 2017), BA (operated by Comair), SAA, Airlink (from Cape Town), and SA Express (also flies to Walvis Bay).

Eros Airport, in downtown Windhoek, is a secondary airport and an important hub for air charter traffic. Over 350 airstrips are dotted across Namibia, allowing charter aircraft to access remote parts of the country with relative ease.

The five big hotel groups with a presence in Windhoek – Hilton, Minor, Marriott, City Lodge and Legacy – are supported by a number of guesthouses and smaller non-branded hotels.

City Lodge is the ‘newest kid on the block’, following the opening of their 147-room Town Lodge (the group’s two-star brand) in Windhoek in late-2017.

Legacy Hotels & Resorts’ Windhoek Country Club is close to Eros airport. It has 152 rooms and offers excellent business facilities, a casino, and an 18-hole golf course for any downtime you might have. It has undergone renovation in recent years and offers an improved experience.

Hilton Windhoek was the city’s first five-star hotel when it opened a few years ago and offers everything you’d expect from the Hilton brand. A business lounge on the top floor is reserved for guests in executive rooms on the seventh and eighth floors – with two computer stations and a variety of food and drinks on offer throughout the day. Make sure you try the pool deck on the roof, which enjoys fantastic views of the city.

Minor Hotels’ AVANI Windhoek Hotel & Casino has a great central location in downtown Windhoek. It features 173 rooms, two restaurants, conference facilities, a beauty spa, and a licenced casino. For self-drivers, it offers free parking, and is close to public transport for those who require it.

Marriott’s smaller Protea Hotel Fürstenhof, with its 33 guest rooms, has conferencing and banqueting facilities for between 70 and 120 delegates, as well as a boardroom that can seat up to 10 delegates. It also offers free wi-fi to guests, as does the Protea Thuringerhof, which has 26 rooms and is five kilometres from Eros Airport.

The group has four other properties in Namibia – in Walvis Bay, Ondangwa, and the Caprivi Region.

American Express, Diners Club, MasterCard and Visa are all widely accepted in Namibia. Travellers should check with their credit or debit card company for details of merchant acceptability. Be aware that petrol stations do not accept credit cards as payment for petrol.

ATMs are widely available and will dispense Namibian dollars. When paying in cash, most establishments will readily accept South African rands – the exchange rate is 1:1 – and will, where possible, give you change in rands, if you ask.

Travellers to Namibia must ensure that their passport is valid for at least six months beyond the intended stay in the country. All visitors must also have a valid return air ticket.

For doing business of any kind in the country, including attending meetings, training courses, sports events and trade fairs, a business visa is required.

Nationals from Angola, Botswana, Kenya, Lesotho, Malawi, Mauritius, Mozambique, South Africa, Tanzania, Zambia and Zimbabwe do not require a visa to enter Namibia. Travellers from all other African countries can obtain a visa on arrival in Namibia.

Mobile phones are very common and run on the GSM network, using the same frequency as Europe and the rest of Africa. It is recommended that you purchase a local sim card and airtime or data, as roaming costs can be pricey.

There are internet cafes in most of the major centres, and hostels often have access as well. Most of the hotels offer wi-fi, although some at an extra charge.

If your visit is confined to Windhoek, Walvis Bay and Swakopmund, you shouldn’t need to guard against local diseases. If you’re visiting northern Namibia, consult a doctor before travelling, as it is a malaria-risk zone. Take appropriate malaria precautions when travelling to these areas.

A yellow fever vaccination is compulsory for certain nationalities. It is recommended that you are vaccinated against Hepatitis A and B, rabies, typhoid, tetanus and polio, although the absence of any of these will not hinder your travels.

Namibia’s medical system is modern and capable of attending to whatever needs the traveller may have. However, this is largely restricted to the main cities.

Namibia is a fairly safe country. Petty crime, such as theft from cars and pick-pockets, do occur, but if you display a little common sense, like not flashing expensive jewellery or leaving valuables in plain sight, you are unlikely to become a target.

The roads are in fairly good condition and most people traverse the country by land. An all-wheel-drive vehicle is only necessary on tertiary roads and along the Skeleton Coast. An international driver’s licence is only required for visitors who drive on the right-hand side of the road. For those who drive on the left, flashing your valid driver’s licence issued in your country is enough to get you the keys to a rental car.

In Windhoek, you have a wide choice of dining options, many of them found along Independence Avenue. Along with local eateries, you’ll find a few South African favourites such as Spur, Steers and KFC.

Joe’s Beerhouse is a local favourite and a must for visitors. The eclectic décor holds immense charm, even as it boggles the mind. Farm equipment is displayed alongside empty alcohol bottles. Tables are illuminated by hanging bulbs encased in straw lampshades draped with plastic ivy, and bar stools are made from disused toilets. The pub offers a relaxed meal, in generous portions, with a varied menu.