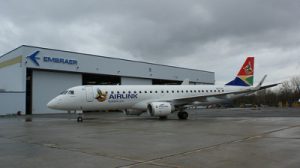 Airlink is acquiring five E-Jets – three E170s and two E190s – the first South African airline to do so, with the first aircraft expected to arrive in the first half of 2017.

According to Rodger Foster, CEO of Airlink, this is the beginning of the implementation of a well-planned growth and modernization strategy that includes replacing the current fleet of Avro RJ85s over the next three years. “The strategy calls for a total of 13 E-Jets, and we are in the process of sourcing the balance of the fleet requirement – an additional 8 E190s – from the market,” he said.