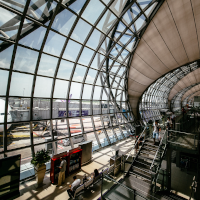 When Viktor Navorski got stranded at an airport in Steven Spielberg’s movie The Terminal that released in 2004, I sympathised with him. Those unending hours spent living out of a suitcase didn’t seem so appealing. However, if the movie was remade today, I’m sure it would have another perspective. Perhaps, Viktor would be seen enjoying therapeutic spa treatments at an airport spa after an indulgent meal at Wagamama. He could then check-in into a chic airport hotel — living his best life and not being too upset about a missed flight.

That’s because the airport experience has evolved a great deal over the last decade. Airport layovers are transitioning into mini vacations, if time is a luxury on hand. A meal in the choicest of restaurants or relaxing spa therapy is now passé. Select airports are going the extra mile to ensure your time is made the most of. From being entertainment hubs to encompassing futuristic technology whilst showcasing the best in art, airports are evolving and here is how.

If you’re flying out of Frankfurt Airport anytime soon, catching a flick before your flight should be on your list. That’s because the two Movie Worlds in Piers A and Z are inviting passengers in transit to watch the latest blockbusters for free. Comfortable couches for up to three persons are arranged in front of TV screens, just like at home.

Singapore’s Changi Airport also caters to the cinema aficionado with its 24-hour movie theatres in Terminals 2 and 3. Screenings are available free of charge. Singapore’s airport has a host of other entertainment options that ought to keep you more than just occupied. From Jewel Changi Airport’s 14,000m2 Canopy Park that features attractions and gardens to the Changi Experience Studio – a unique space with immersions across 20 different touch-points – there’s something for everyone here. The latter is home to interactive games, projection storytelling, experiential shows and gallery exhibits.

For sporting enthusiasts, Hamad International Airport’s ‘Golf Simulator Experience’ at its Oryx Airport Hotel is something worth considering. Being the only airport in the Middle East to offer a state-of-the-art indoor golf simulator experience, this innovative recreational space is equipped with a high definition golf simulation package, golf bags and clubs.

This airport definitely takes its sport seriously. Two years ago, it celebrated the 2018 FIFA World Cup in Russia with signature Qatari panache. In collaboration with the Supreme Committee for Delivery & Legacy (SC), a month of activities held at three of the airport’s football-themed fan zones welcomed over 50,000 participants.

All that sport definitely calls for a tipple or two, and it doesn’t get better than German beer — especially when it’s freshly brewed. Featuring Europe’s only airport brewery, Munich International Airport houses the Airbräu restaurant, where you can sip on authentic Bavarian beer. In the tavern and the adjoining covered beer garden, passengers can also enjoy hearty German classics such as roast pork and dumplings. Airbräu also features a regular programme of live entertainment, from traditional Bavarian bands to comedy acts.

Speaking of Bavarian traditions, airports are emblematic of their home country’s heritage. Showcasing Korean music and culture, South Korea’s Incheon International Airport hosts an array of performances and concerts that range from semi-classical to K-pop. In fact, the airport houses a fully-fledged event space called Millennium Hall at Terminal 1 that hosts cultural performances each day of the year.

At the end of the day, it is seamless technology and digital effortlessness that truly sets an airport apart, placing it in another league.

Istanbul Airport has introduced a f leet of child-size humanoid robots to make sure no-one gets lost. Passengers can approach the robots and scan their tickets to see their f light status, get directions and view other f light information in English or Turkish. The ‘humanoid’ (aka human-like) robots move on wheels and can perform expressions through their arms and on-screen faces.

In Frankfurt ’s airport too, self-driving guide robots called YAPE (Your Autonomous Pony Express) accompany passengers to their gates and help them to transport their small luggage. YAPE can carry up to 30 kilograms at a speed of about six km/h indoors. Since the self-driving electric robot senses its surroundings, it is able to circumvent obstacles.

Another piece of technology that’s becoming increasingly omnipresent in airports across the globe is facial recognition. Flying out of Beijing Capital International Airport resembles a Minority Report-like experience as facial recognition scanners are everywhere, from the boarding pass turnstiles to buying a duty-free perfume. The technology, which links a passenger’s face to their passport at check-in, is designed to speed up the whole process of moving through the airport.

Biometric identification is also being introduced as a replacement for passenger passports and boarding passes at Hamad Airport. Although this is still in its trial phase, once completed, passengers’ flight, passport, and facial biometric information will be combined in a single electronic record at the self-check-in kiosk or on a mobile app. Changi Airport’s Terminal 4 also offers a fully-automated departure process from check-in to boarding. Integrating facial recognition, FAST (Fast and Seamless Travel) – a suite of self-service options – allows passengers to breeze through the airport with minimal effort.

As hallmarks of the respective countries, airports are literally gateways to the destinations of the world. Public art takes another dimension when it’s situated at an airport. Perhaps there isn’t a more apt place for a country to display its local culture and history than an airport – and this has been extensively observed in recent times.

Walking into Terminal 2 of Chhatrapati Shivaji International Airport in Mumbai is always a personal delight. Drawing inspiration from the white peacock (the peacock is India’s national bird), the 50-feet tall glazed walls are dauntingly beautiful. The airport showcases a unique collection of Indian art and handicrafts in one of the largest Indian public art initiatives called Jaya He Museum.

The four levels of Terminal 2 teem with over 5,500 pieces of Indian art and handicrafts, including tribal totem poles and a 3D map of Mumbai built from recycled chips and circuit boards. For those keenly interested in Indian heritage, there is a Jaya He Safari that takes travellers across the featured artwork.

Hamad Airport also symbolises Qatari culture and heritage with its noteworthy collection of art pieces by internationally acclaimed, regional and local artists in curation with Qatar Museums (QM), a government entity that oversees the Museum of Islamic Art. The airport acts as an innovative exhibition space for over 20 international art pieces to inspire global travellers. An example is ‘Cosmos’ by internationally-acclaimed French Artist Jean-Michel Othoniel that draws inspiration from an artefact located in the collection at the Museum of Islamic Art in Qatar.