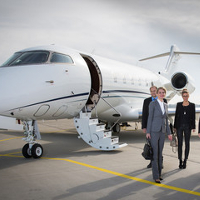 The size of the African aviation industry is nothing to be sniffed at.

It apparently supports $55.8 billion of economic activity and 6.2 million jobs in Africa, according to Raphael Kuuchi, Special Envoy to Africa on Aero-Political Affairs at the International Air Transport Association (IATA).

“While this is impressive, we are only scratching the surface of what aviation can contribute to building Africa’s future,” Kuuchi said at the African Airlines Association’s (AFRAA) 8th Aviation Stakeholders Convention held in Mauritius in May.

But challenges remain – among them, exorbitant fuel costs, departure fees and taxes, which are among the highest in the world,

“Too many African governments tax aviation as a luxury rather than a necessity,” said Kuuchi. “We must change that perception. The value of aviation for governments is not in the tax receipts that can be squeezed from it. It is in the economic growth and job creation that aviation supports.”

That’s ‘aviation’ across the board – not just in the commercial space.

The private aviation sector has a role to play here.

As of 2018, there were 481 registered private jets in Africa and the continent’s year-on-year business aviation growth was 44%, according to Philip du Preez, ExecuJet Africa’s Group GM: Flight Operations, speaking at the Commercial Aviation Association of Southern Africa’s annual symposium in 2018.

That’s still a relatively small market, if one compares it with the world’s other regions.

According to Beam Aviation, Africa’s total trails the top eight individual countries, in terms of business aircraft numbers, with the United States way out in front with approximately 21,340, followed by Brazil (1,539) and Mexico (1,414), whilst the country in eighth position was Great Britain, with 502.

No surprise, then, to hear most market commentators and interested parties – including those based abroad – stating that the African private aviation industry has much potential and scope for growth.

“It seems that Africa is one of the last continents where there is still massive potential for investment from local and international companies,” says Jeffrey Emmenis, CEO of Vertis Aviation, the Switzerland-headquartered charter specialist, which recently beefed up its African operation with the appointment of Leslie Hart in a business development role.

“Confidence (in Africa) has grown as economies have strengthened,” says Emmenis. “Commercial airline travel still has many limitations and business aviation is often the only means of travel between point to point destinations.”

Hart picks up on this.

“Growth is predominantly driven by commodity prices on the whole in Africa as the oil, gas, gold, and minerals sectors need business aviation to thrive,” he says. “In addition, industries such as construction, telecoms and general infrastructure development are driving demand. There is huge potential across the continent.”

Sure, the potential is there, but it hasn’t been a smooth couple of years for some of Africa’s biggest economies, with the likes of South Africa and Nigeria facing serious challenges.

“When the larger economies underperform there is a direct correlation with reduced demand for charter flying,” says Gavin Kiggen, ExecuJet’s Vice-President for Africa. “For example, in Nigeria and Angola, both economies have a 10% and 50% dependence, respectively, on oil contribution to GDP. That means that since the oil price and demand has been reduced drastically, those economies haven’t recovered and this has cascaded down to the aviation industry, because we support those economies through charter flights.”

Nonetheless, there are those who are seeing the opportunity in trying times.

“In Africa, we have substantial traffic,” says Omar Hosari, Founder and CEO of Dubai-based UAS International Trip Support. “In 15 African countries we’re handling more than 100 movements a month. Clients might be using existing FBOs, but they still need somebody from UAS to supervise the process. These flights are coming to Africa from all over the world—from the U.S., Europe, and China.”

UAS has close ties with the Chinese market through its partnership with Deer Jet, which bought a majority stake in UAS in late-2016.

“Everybody is trying to invest in Africa,” says Hosari. “China’s Belt and Road Initiative goes through Africa. Last year, at the China-Africa Cooperation Forum, China announced it would be providing $60 billion in financial support to Africa. We see Chinese, Turkish, French, British, and Dutch operators going into Africa. Mostly, they are industrial company executives flying in.”

Hosari also believes that Africa’s big economies will bounce back.

“Nigeria and South Africa are incredibly strong, and Rwanda is growing really rapidly,” he says. “I was surprised to see that, recently, they launched their first satellite— this country [was] at civil war only recently. I think they are on the right track.”

So, for some, the wheel is turning, Africa is on the right track, and the opportunity is there.

“It is well known that African economies are strengthening, and consequently, the need for aviation to support this growth will drive the need for more aviation professionals,” says Dawit Lemma, CEO of Addis Ababa-based Krimson Aviation, an aviation consulting business that offers a suite of services, including charter, ground handling and other business aviation-related services.

Speaking of Krimson Aviation, 2018 was a significant year for Lemma’s operation.

The company experienced encouraging growth, thanks largely to the the Ethiopian Civil Aviation Authority (ECAA) partially opening the Ethio- Eritrean airspace that had been closed to any air transport for the previous 20 years.

“There are about five air routes which were closed for the last 20 years,” said Wossenyeleh Hunegnaw, Director-General of the ECAA. “For the time being we have opened the air route that starts from Kenya and passes through Addis Ababa-Mekelle to Asmara. The remaining air routes will be opened shortly after the necessary preparation works are done.”

It is not only Ethiopian Airlines that uses the Ethio-Eritrean airspace. Many international airlines and private jets use the air routes to fly to and from Europe and the Middle East.

This development has significantly changed the business outlook for private operators like Krimson Aviation and is a great example of how Africa’s governments and the regulatory environment can facilitate economic growth, if the political will is there.

IATA reported that 4.1 billion passengers were flown worldwide in 2017, a new record, with a promising forecast to reach 7.8 billion passengers by 2036. At the same time, the United Nations World Tourism Organisation anticipates a rise in international visitor arrivals from 1.3 billion in 2017 to 1.8 billion by 2030.

Those are impressive numbers, with the world’s travel only going one way. Yet, as it concerns Africa, and with the continent home to 12% of the world’s population, it only accounts for less than one percent of the global air service market.

One of the reasons put forward for Africa’s under-served status, according to a 2018 World Bank study, ‘Open Skies for Africa – Implementing the Yamoussoukro Decision’, is that many African countries restrict their air services markets to protect the share held by state-owned air carriers.

But the big question is, will it work this time?

“The Single African Air Transport Market in its current format is experiencing challenges,” says Kiggen. “Government involvement, high taxes and political meddling have unfortunately significantly slowed the progress of this great initiative. The opportunity cost of not having open skies on the continent is crippling to regional and continental economic growth, beyond what we can imagine.”

But a disappointing number of countries have signed the agreement.

Despite being faced with evidence that open skies can and have worked elsewhere, African nations continue to be protective of their airlines and airspace. Protectionism has taken many forms – applying restrictions on frequencies and capacity, the type of aircraft operated, volume of traffic to be carried, and routes to be served. It is often motivated by the fear that the national flag carrier will be unable to compete with larger airlines.

One area that is moving forward in the African private aviation space is that of connectivity.

It’s becoming the norm that if a principal gets on a jet and there is no connectivity, then the aircraft won’t fly. The opportunity to emulate the on the ground digital experience in the sky is becoming increasingly important.

Built in to this is the whole issue of cyber security – another major issue for the business aviation industry. A lot of people don’t realise that even when you are at 40,000 feet, you are as vulnerable to cyber-attack as you are on the ground, unless you are using a secure server and practising digital security protocols in the sky. Throw in the fact that the execs making use of private aviation are usually the company’s most senior members, privy to sensitive information and often in possession of valuable documentation, and you can see why inflight connectivity is not just a simple case of flicking a switch and logging on.

Satcom Direct, a global connectivity solutions company, says hackers are going after passengers on business jets with rising frequency and it has logged a 54% increase in critical and high-level threats. The company has noticed that recent threats are often from organized groups such as Fancy Bear and sophisticated, well-known hackers, some of whom are hired by nation-states or criminal entities hoping to create chaos or target specific VIPs.

“These perpetrators making particularly nasty threats invariably involve a group of ‘black-hat’ hackers working in a closed network that continuously attack aircraft,” says Josh Wheeler, Senior Director of Cybersecurity at Satcom Direct. “It takes a lot to stop these aggressive and intelligent hacks.”

“There are certainly requests by clients for aircraft equipped with wi-fi, as we live in a connected world,” says Kiggen. “Some of the previous generation aircraft must be retrofitted with wi-fi solutions and this remains at the discretion of the respective aircraft owners. Some of our newer generation aircraft in the charter fleet, such as the Challenger 350 and Pilatus PC-24 jets respectively, all ensure continuous high-speed connectivity for clients.”

The potential for growth is there – it just needs to be realised.

And for that to happen, Africa’s economies need to move in the right direction and the continent’s governments need to show more intent towards – and ultimately achieve – an open skies environment, thereby providing the regulatory platform for private aviation in Africa to flourish and play a role in securing the sustainable future of its citizens.