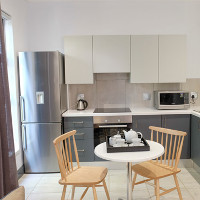 BACKGROUND: Faircity is a hotel group specialising in owning, managing and co-developing hotels in Southern Africa. Its primary service offering is business and conference hotels, as well as serviced apartments. Faircity Junction is a new-build property in the upmarket suburb of Menlo Park in Pretoria.

WHERE IS IT? Located on Atterbury Road, one kilometre from the Atterbury offramp on the N1 highway, Faircity Junction is easy to find. It takes about 40 minutes by car from Johannesburg.

ROOM FACILITIES: The first phase consists of 29 one-bedroom apartments, laid out rather confusingly over three blocks of three stories each. I did suggest to management that the units be renumbered, or at the very least, signs be erected to make navigation a little easier. There are three unit types – standard, superior and executive – which differ in size (from 38 to 45 square metres) and configuration. All units are decorated in white and shades of grey – neutral but warm and welcoming. My standard unit, overlooking Atterbury Road, was well equipped for a long stay, with a full-sized fridge, washing machine, oven, stove top, kettle, toaster and microwave in the kitchen area. A little investigation uncovered a pot, pan, cups, glasses and other necessary kitchen equipment. Although the units are serviced, I did expect to find a few basic cleaning products under the sink – washing up liquid, dishwashing sponge and laundry soap perhaps – but nothing was stocked. I was impressed at how much cupboard space was available. Definitely a kitchen designed for long- term use. There was more cupboard space (some of which concealed an iron and ironing board) in the bedroom, alongside a rather comfortable king-size bed. The bathroom was well-appointed with a modern shower and basin vanity. There was even a selection of hotel-sized toiletries. The living area was decorated with a comfy couch, coffee table, small dining table and two chairs and a large flat-screen TV, with an array of DsTV channels, mounted on the wall. Apartments are cleaned five days a week and the service is included in the daily rate. For an extra cost, you can request that your laundry be washed and ironed or dry-cleaned. You can also ask for a basic grocery hamper to be left in your kitchen for your arrival. This isn’t included in the daily rate, but the expense is well worth the peace of mind knowing that you’ll have bread, milk and coffee waiting for you. I was dismayed to discover no air-conditioning unit, especially since the position of the windows didn’t allow the air to circulate. I was assured, however, that the air-cons were on their way and would be installed, hopefully before the blistering heat of summer sets in. Besides cooling the rooms, air-con will allow you to keep your windows closed against the increased street noise that often accompanies a weekend night.

RESTAURANTS & BARS: While there is nothing on site except the kitchens in the apartments, there is a plethora of dining options in close proximity. The Menlyn Park Shopping Centre is a mere four kilometres from the complex’s gate, and within a two-kilometre radius you’ll find just about any cuisine you’re in the mood for.

BUSINESS & MEETING FACILITIES: Again, nothing on site, except your unit, which certainly could entertain a guest or two for a quick meeting.

LEISURE FACILITIES: There’s so much to do in and around Pretoria that long-stay visitors really should spend their leisure time exploring the city. The State Theatre, the Atterbury Theatre, the Voortrekker Monument and the Union Buildings are all nearby attractions to add to your down-time to-do list. The Faircity Junction concierge and travel desk can arrange outings and transfers for you, at a cost.

VERDICT: The central location is very handy, but if you’re using Google Maps to navigate to the address, set the address to Junction 502, or you’ll end up elsewhere. The units are well-designed for long-stays. The street noise can be off-putting, but if this worries you, ask for an apartment at the back of the complex, which is definitely quieter. All-in-all, a solid choice if you need to be in or near Pretoria for a while.